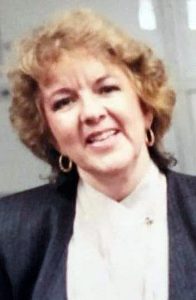 Although Anna Mary O’Rourke left the community of Amityville Dominicans in 1970, she has been living out her call as a Dominican Preacher!

After leaving the order, she got a job at the New York Telephone as a School Consultant and later as a manager of corporate contributions. She had the responsibility to donate to grassroot causes such as Noah’s Ark – a non-profit run by the Dominican Sisters. She was later invited by S. Dolores Gartanutti to join their Board. “How happy I was to be working with my Dominican family again,” she said.

“Twenty years later, I retired to become a part-time Spanish teacher in my parish. It was fun,” said Anna. “I missed the chalk, the blackboard and the chance to influence young people. My seventh graders started Los Amigos and brought their beautiful handmade quilts on visits to local nursing homes.”

“I married Chris Norton, brother of my friend S. Mary Gerald, OP, whose wife had died leaving him three adult children,” she recalled. “We almost didn’t have a wedding because I lost my letter of Exclaustration from the bishop. Thankfully, her good friend S. Ernie Wenz, OP, got a copy from the community archives and the wedding took place!” She has been married 35 years.

She became an Associate to the Amityville Dominicans in 1993.  The next year, she moved to Florida.

Now retired, she had a lot of time for ministry!

“I volunteered at Life Skills, a program for mentally-challenged young adults and developed a curriculum with the parents which included math, music, art, cooking, geography and aerobics,” she said. “I then volunteered at Connections Job Development, a program founded by a Medical Mission nun.”

The former Dominican Sister and the Medical Mission Sister built a strong relationship through a monthly prayer group. That “Gathering of Women” became a force to be reckoned with!

“Today, our Gathering of Women has taken an active role in our community,” she said. They have presented a parish workshop on Women in the Church; helped immigrant families at Annunciation House in El Paso; Reinstated the Peace and Justice Committee in the parish; Got free bus passes for convicts soon to be released from jail; Collected writing paper and cards for immigrants through the Stamp Out Despair Program; Held a memorial service for the deceased homeless in our area; and Collected clothing for the homeless and presented two conferences on Human Trafficking.

“In 2006, I volunteered as an English Second Language teacher at the parish New Beginnings Program and developed a curriculum for ESL and American Citizenship,” she said. “I retired due to medical reasons in 2017 but the program continues celebrating 29 new American citizens in three years. I believe my calling as a Dominican Sister in 1953 continues as a Dominican Associate today…only the setting has changed. The Preaching Continues!”