The second annual convocation of the Dominican Sisters Conference is right around the corner. Meetings begin at 7 p.m. on Thursday, Oct. 1, and end following Eucharist on Sunday, Oct. 4, at about noon. This will be a wonderful time of gathering for prayer, conversation, action, and fun. Sisters and associates who have not yet registered may still do so on the DSC web site. The convocation will be held at the Westin Hotel in Wheeling, Illinois, not too far from O’Hare Airport.

What: DSC Convocation
When: October 1-4, 2015
Where: The Westin Chicago North Shore, Wheeling, Illinois 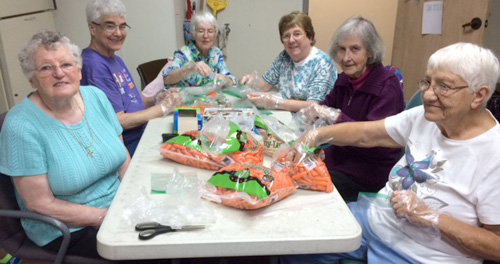 In  August, the Tacoma Dominican Sisters and associates joined with the Sisters of St. Francis of Philadelphia in a collaborative service project for the Year of Consecrated Life. During the day, different teams came together to package pretzels, carrots, animal crackers etc. for the Hospitality Kitchen for St. Leo’s, Tacoma. Each day, lunches are packed and served to children in need at several area schools. “This need is ongoing, and we all felt that we wanted to do this again,” said Sister Sharon Casey, OP.

One woman’s passion for social justice and her faith, cultivated by involvement in her local parish’s “Just Faith” program, pilgrimages to Guatemala and El Salvador, and living with Maryknoll Sisters in Cambodia, bore permanent fruit in her life on Aug. 24, when she took her First Vows, becoming the newest Maryknoll Sister of St. Dominic.

Austin, Minnesota-born Mara Darleen Rutten made her vows at a Mass celebrated at Annunciation Chapel, Maryknoll Sisters Center, Ossining, New York, by Father Bill Remmel, a priest of the Society of the Divine Savior who served as pastor of Most Holy Trinity Parish, Tucson, Arizona, where Sister Mara participated in “Just Faith,” a program designed to encourage personal then social transformation through their faith, that would lead her into her life’s call. Now retired, Father Bill, who marched for civil rights while yet a young seminarian in the 1960s, “has been very instrumental in many of Mara’s journeys,” noted Sister Teruko Ito, a member of the Maryknoll Sisters Congregational Leadership Team in her opening remarks, adding that he remained active in immigration concerns, especially around border issues.

She then went on to express gratitude for the gift that Mara was to the congregation. “Unfolding Mara’s bio was just like opening a treasure box: surprise events, encounters in academic circles, government jobs and neighborhood projects, conversations with many languages through worldwide journeys kept popping out. We are gifted with so many relationships through Mara.”

During the Mass, Sister Mara made a public proclamation of her religious vows to live a life of commitment to God through Maryknoll Sisters. In so doing, Sister Teruko explained to those gathered, “she says yes to live her vows of chastity in intentional community, living out Mary’s Magnificat, in sharing power with others and celebrating the wholeness of creation. She says yes to live the vow of poverty in an alternative mode to consumer economy, in case of our common home. She says yes to li9ve the vow of obedience, responding to a call to participate in an alternative politics, making a difference in acquisition and use of power. Her yes to Maryknoll is a commitment to a lifelong journey of mission and in ministry,” Sister Teruko added, “as we envision one earth community.”

Scriptural readings selected by Sister Mara herself for the Mass also illuminated something about the woman and her choice. “I want the first reading to be about a personal call [she chose Jeremiah 29:11-14], the second to be about community [Philippians 1:3-11 was the selection here], and the third about our commission to serve [Jesus Washes the Disciples’ Feet from John 13],” she told Sister Bridget Chapman, the Maryknoll Sisters who walked closely with Sister Mara during the discernment of her calling and gave a reflection on those readings during the Mass. Reflecting on the passages which called Jeremiah to the life of a prophet, the Philippian church to a life of love for God and one another, and the apostles, as well as those who came after them, to a life of service, Sister Bridget told her newest Sister, Mara, “You will be living with many Maryknoll Sisters who have labored long and faithfully in the fields afar. Faithful daughters of Mollie Rogers {the congregation’s founder]. Get to know them, listen to their stories; they have much to teach you, both by their experience and their faithfulness.” Then she added, “Some time ago, a Maryknoll Sister was asked, ‘What would you say about your life?’ She responded, ‘If I had my life to live over again, I would choose to be a Maryknoll Sister.’ And may it be so for you, dear Mara.”

A 2000 graduate of Arizona State University, Tempe, with a doctorate in philosophy, Sister Mara, who also holds a master’s degree from South Illinois Univeristy, Carbondale (1996), and a bachelor’s degree from University of Minnesota, Morris (1994), recently completed her candidacy as a Maryknoll Sister in Chicago, IL, where she attended Catholic Theological Union and completed other preparatory programs required by the congregation.

Following her participation with the “Just Faith” program at her church, Sister Mara contacted Maryknoll Sisters, and partnered with them first as a lay woman, working with them among the poor and underprivileged in Cambodia. This association led her to seek membership in the congregation. In her request to be considered, Mara wrote, “I have admired the Maryknoll Sisters since I was a little girl and first heard about them through the atrocities in El Salvador. From that time forward, that is what I thought of when I thought about love: to go where you were needed but not always wanted, to refuse to abandon those whom you had come to love despite physical danger, and to serve God all the while. Through the Maryknoll family, I believe I have found the best avenue to give and receive love.”

Upon recitation of her vows, Sister Mara received her Chi-Rho ring, the sign of her commitment to God and Maryknoll Sisters which formalizes her entry into religious life, from Sister Antoinette Gutzler, president of Maryknoll Sisters. In the fall, she will receive her mission cross and her first official mission assignment as a Maryknoll Sister overseas.

Founded in 1912, Maryknoll Sisters is the first U.S.-based congregation of women religious dedicated to foreign mission. Working primarily among the poor and marginalized in 24 countries around the world, they now number 458 members from both the US and overseas.

Bread crumbs—that trail you don’t always see behind you but is visible when you finally look back. That’s how Sister Kathy Flynn describes her journey to religious life. She made her first profession of vows with the Sinsinawa Dominican Congregation Aug. 2. The pull to something more than a career, home, and family was always present. Her trail may be a little longer than some, but she feels blessed to have had so many people in her life leave crumbs along the way. Read article by Eileen Dushek-Manthe

“For me the idea of religious life was basically a response to a mid-life crisis. Pursuing my career as a transportation engineer and planner was a fulfilling endeavor that sustained me for over two decades and gave me a significant amount of independence. In 2009, though, I found myself hooked by this inexplicable sense of joy when I began to really get involved in parish ministries. Before I knew it, I had become not just a workaholic, but also a Churchaholic! Not too long after, I began to feel a longing for integration, focus, and balance, to which the discernment of religious life with the Dominican Sisters of San Rafael ultimately emerged as the answer. During my candidacy, I found treasures that far surpassed the value of the possessions and the independence that I gave up when I entered: deep connections, self-awareness, a vibrant prayer life, peace, and yes – even greater joy. Now my longing is to become the person that God intends, understanding that that entails embracing a life of faith and interdependence. I am so grateful to be on this path and for all the love and support.”

Sister Christina made her First Profession of Vows on Aug. 9, the day after the Feast of St. Dominic, having completed a year as a candidate, a year as at the Collaborative Dominican Novitiate, and a year of ministry. It was a beautiful day for a joyous celebration of Mass and Sister Christina’s first profession of vows. She was surrounded by family, friends, colleagues and her Dominican sisters.