Dominicans: A Short Introduction to Our History in the U.S. 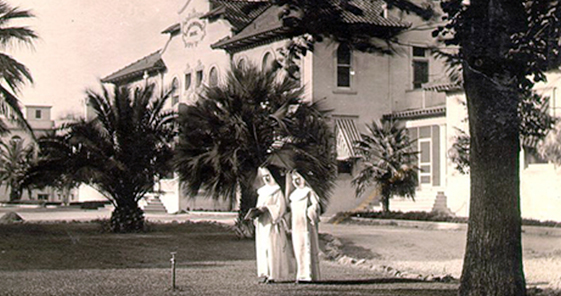 Men and women of the Order of Preachers, the Dominicans, have been on mission in the United States for more than two centuries. The mission given them by Dominic de Guzman (1170-1221) from the founding of the Order, is to proclaim the Word of God by preaching, teaching and example, while sustained by life in common.

Dominican spirituality is centered in the Word of God. The creative Word of God has been proclaimed

by such members as Thomas Aquinas and Meister Eickhart. The incarnate Word has been proclaimed by Catherine of Siena and all who contemplate and preach the mystery of Jesus Christ. The revealed Word has engaged those who have studied and taught theology and Scripture in every century.

The single mission of the Order of Preachers embraces many ministries, developed as needed to bring the Word of God to persons in varying societies and circumstances. St. Dominic had this in mind when he urged the first members to identify with each culture through the use of the vernacular languages. For the same purpose he asked the preachers to meet all people as mendicants, ready to exchange gifts and necessities with others in the spirit of Jesus and the apostles.

Dominicans in the United States continue their ministries of preaching and teaching for changing or lasting needs. They have also assumed ministries newly related to the proclamation of the Word, such as electronic communications, and others urgently required by the needs of people for life, justice, and peace. The twofold motto of the Order continues to be Veritas, in a world hungering for truth; and Caritas, the equally urgent need for human compassion and mercy.

The Order of Preachers is composed of men and women of four branches:  friars, who may be priests or brothers; cloistered nuns; sisters; and laity. Dominic de Guzman was called to ministry in the universal Church. His followers have proclaimed the Gospel around the world to peoples never known to the founder, including those of the Americas.

Learn more on the Dominican History at www.opcharism.org.

Chronology of Dominicans in the United States