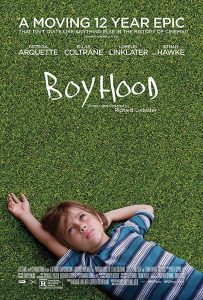 “Boyhood” is the highly acclaimed new film from writer-director Richard Linklater. This is the coming-of-age story of Mason, a Texas boy who we see grow from the age of 6 to going away to college. What makes “Boyhood” unique is that it was actually filmed over a 12-year period using the same actors. In this way, actor Ellar Coltrane, who plays Mason, actually does grow up on camera, without the need for makeup or special effects. In addition, we see his older sister Samantha (Lorelei Linklater) grow up too.

Patricia Arquette and Ethan Hawke play the parents of Mason and Samantha. Mom tries her best to raise the children, despite her sometimes desperate circumstances and two unsuccessful marriages. Eventually Mom gets her degree and teaches psychology at a college. As the movie opens, Dad returns from an extended trip to Alaska. Dad has charm and obviously cares about his kids. However, he is irresponsible and does not appear to support the kids financially, leaving that up to struggling Mom. Dad eventually settles down, marries, gets a job (I think) and has another child.

“Boyhood” is a collection of moments over the years, some harrowing (the violent outbursts of Mason’s first stepfather), some sweet (Mason walking alongside a girl on a bicycle who invites him to a party). Other moments are ordinary (first day in school); some are sad (Mom desperately trying to figure out how to raise her kids on her meager income).
END_OF_DOCUMENT_TOKEN_TO_BE_REPLACED

Sister Rosemary Hickmann, OP, was honored with the Bishop Norbert M. Dorsey Award Aug. 8 in Orlando. Sister Rosemary served as associate superintendent of schools for the Diocese of Orlando from 1997 to 2011. Read more

Sister Kathleen Ryan, OP, director of the Dominican Literacy Center in Aurora, Illinois, was featured in a recent article in the Life & Style section of the Chicago Tribune. Amy Manion, past president of the center’s board, had the following to say about Sister Kathy in the article: “There are two kinds of people—battery chargers and battery drainers. Sister Kathleen (Ryan) is a battery charger. She inspires the students and tutors.” Read article