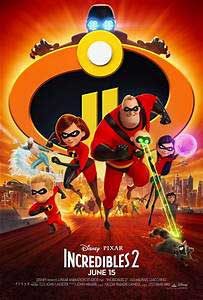 Incredibles 2 is the long-awaited sequel to the much loved 2004 Pixar animated film The Incredibles. The first Incredibles tells the story of superhero family Bob Parr (Mr. Incredible), his wife Helen (Elastigirl), and their children Violet, Dash, and baby Jack-Jack. The Incredibles were forced into an ordinary life when superheroes became outlawed by a government which did not appreciate their contribution to crime fighting, thinking they were disruptive to the police. However, the Incredibles returned to action, defeating the bad guys. The Incredibles became a huge hit, loved by all ages because of its memorable characters, sense of humor and adventure. The Incredibles also resonated with those who feel that their gifts are no longer appreciated as they grow older.

Incredibles 2 takes up where the first film left off, as our superhero family battles bad guys once again. And, once again, they are forced back into their ordinary lives when the police accuse them of interfering in their work. It’s not long before the Incredibles are approached by Winston and Evelyn Deavor, a brother and sister, who want to promote superheroes and bring them the recognition they deserve. To the surprise of Bob, the Deavors choose Helen/Elastigirl and put her to work, stopping a runaway train full of people. Disappointed, Bob returns home to watch over the kids. He finds how difficult parenting can be. Bob tries to comfort Violet with boyfriend problems. Bob also has difficulty helping Dash with his math homework. At the same time, Bob has to try to keep up with Jack-Jack who is discovering his superhero powers. Some of the funniest scenes involve Jack-Jack’s new-found use of his powers, with worried dad, brother and sister trying to protect the child and everyone else in Jack-Jack’s way. Jack-Jack’s encounter with an unsuspecting raccoon is a hilarious highlight of the movie.

At wit’s end, Bob seeks assistance from Edna Mode, a favorite character from the first movie.  The diminutive Edna is a designer who makes the family’s superhero costumes and is now dispensing child-rearing advice. Unfortunately, Edna is only in two scenes of Incredibles 2. I would have liked to see much more of her droll sense of humor.

Also around for support is superhero friend Lucius (Frozone), to help with the kids and join the Incredibles fighting bad guys. Frozone is needed to help the Incredible family rescue Elastigirl from danger.

As in the first movie, Incredibles 2 combines wit, adventure, and state of the art animation along with a great score by Michael Giacchino, sounding like music from a James Bond movie. Unfortunately, writer-director’s story is not as good as the first film. This time around, the story gets unnecessarily convoluted. Trying to balance the home life of Bob and the kids, the scheming of the Deavors, and the adventures of Elastigirl isn’t always easy.

A strong theme in Incredibles 2 is its focus on the family. The talents of all members, even little Jack-Jack, are needed to defeat the bad guys. Despite the efforts of the Deavors to keep Elastigirl from the rest of the family, at the end, they are re-united. At a time when we’ve seen and heard a lot about separated families, Incredibles 2 seems surprisingly relevant.

Like many sequels, Incredibles 2 isn’t quite as good as The Incredibles. Even so, like old friends, it’s still nice to have our favorite superhero family back and spend some time with them on a hot summer day.