Faith and Film: A Quiet Place 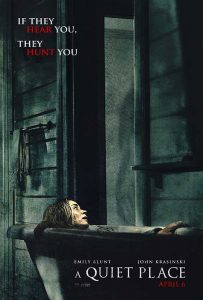 Due to a very busy Lent and Easter season, I’ve missed some movies that have been released in the last month, including some faith-based films I wanted to see. I hope I can catch up with them!

Meanwhile, I did have the chance to see A Quiet Place, a suspenseful movie that has become a hit this spring. A Quiet Place begins with the scene of a family of five (Father, Mother, a hearing-impaired daughter and two young sons) scrounging through a deserted small town grocery store looking for food and supplies. The father (John Krasinski) puts his finger to his lips to remind the children to be silent. The audience soon learns that it is imperative that the family keep quiet or something terrible will happen. It doesn’t take long to find out what. Noise attracts terrible creatures, who look like aliens from the movie of the same name. These creatures, apparently blind, have wiped out all traces of civilization. This family looks to be the remnants of the human race, in this rural part of the U.S., if not beyond.

There are several things that I like about A Quiet Place. First, it’s original. It’s directed and co-written by Krasinski (best known for the TV series The Office). Second, it’s very tightly constructed. We don’t know what happened to unleash the terrible creatures on humanity. We’re just there with this family trying to survive day to day. At 90 minutes, it’s a short movie. It almost seems like an extended episode from The Twilight Zone. Finally, it’s in the horror genre, suspenseful and scary, but without the gory violence that are usually part of contemporary horror movies. It’s not devoid of violence, but it’s certainly not extreme.

A Quiet Place is ultimately about family. Dad and Mom (Emily Blunt, who is married to Krasinski) work very hard to keep their family safe. It’s great to see the family sit at the table and join hands in a silent prayer before eating. In a harrowing sequence, Mom goes into labor while Dad is away from the house. Imagine going into labor without being able to make a sound! Not only do they work hard to keep their children safe, they realize that they may be the last humans alive. The survival of the human race could well be at stake!

Forgiveness is also a theme in the movie. The children need to know that their parents love them unconditionally, and that they can forgive each other for mistakes made. Undoubtedly, this is an essential quality of all good families.

A Quiet Place may be the quietest horror movie since the silent era. The silence is quite effective. Like the family, the audience is aware of every noise. The family has adapted their life to be able to survive in a soundless world:  A creak of a floorboard, the fear of knocking something over, a child’s cry, or an exposed nail on a stair, could all have disastrous consequences.

A Quiet Place has struck a chord with audiences this spring, making it a surprise hit. If you’re in for a scary, suspenseful movie that affirms the family, this movie will stay with you for some time.