Faith and Film: Only the Brave 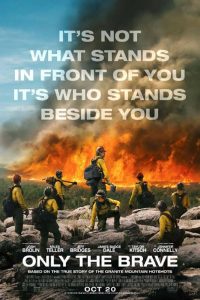 Only the Brave tells the true story of a group of forest fire fighters in an Arizona town. They are a local group, who train and work hard to attain the elite status of Hotshots. Hotshots are akin to Navy Seals, who can be called into action anywhere they are needed. They name themselves the Granite Mountain Hotshots.

Ed Marsh (Josh Brolin) is their chief. We learn throughout the movie that Ed (called “Supe” by the men) is in recovery from substance abuse, and a Buddhist who carries prayer beads with him. Ed is married to Amanda (Jennifer Connelly), who cares for horses who have been abused. They have a strong marriage, even though they disagree, sometimes strongly, on important matters. Amanda is often left alone while Ed goes out with the Hotshots. She also wants to have children; Ed does not. I liked Ed and Amanda a lot; they have a great argument scene late in the film. Jennifer Connelly is especially good as Amanda.

Much of the movie is about the male bonding of the Hotshots, most of whom are married men in their 20’s. There is a fair amount of rough language and sexual banter. The men listen to loud rock music while they are traveling to fight the fires. For the most part, we don’t learn a lot about the individuals. They’re all different, but, work together very well as a unit. I was especially interested in one who always had his Bible with him and would read it while on the bus with the guys, traveling to the fires.

Of the young Hotshots, the one we come to know best is Brendan McDonough (Miles Teller), a young man whose life has been a mess. Brendan applies to the Hotshots when he discovers that his ex-girlfriend is pregnant. Brendan has smoked marijuana, drinks too much, and did time for larceny. His girlfriend wants nothing to do with Brendan. He knows this is the only chance he has. To the surprise of the other men, Ed gives Brendan a chance. Amanda tells Brendan that he’s more like Ed than he realizes. Brendan has a rough time at the beginning, and is teased by the other men who nickname him “Donut” (maybe meaning a “Zero”). Despite his rough start, Brendan responds well to the challenge, stays sober, becomes a father to his daughter, and gains the acceptance of the other men.

Only the Brave starts off slowly, but begins to build, thanks to good pacing and a solid cast. The Hotshots, and the townspeople who call them “Heroes” could easily become stereotypes of men who work hard and party hard, with more than a little dose of a machismo culture. It’s interesting to watch their technique as they work together, as a well-oiled machine.  They also put themselves in harm’s way. Forest fires are unpredictable and can quickly change directions when the wind shifts. There are other dangers along the way, like rattlesnakes who can strike without warning.

The movie becomes more engrossing as it progresses, rotating between forest fires and life in the small town. I don’t want to say too much about the last 30 minutes, but they are very gripping, with a sense of dread as the men are called to fight the notorious Yarnell Hill Fire in Arizona. I will say that I was left with a great sense of sadness and loss at the end of this true story.

Only the Brave is especially timely this season after the devastating wild fires in California. We see the destruction that these fires can cause and the courage of the people who fight them. With the abundance of superhero movies, it’s nice to see a modest, well made movie in which the heroes are real ordinary people who work together courageously, seeking no recognition for the service they provide their communities.