Dominican Sister of Amityville Margaret Mayce, OP, is Sent Forth as DSI Coordinator in Rome

In October, Sister Margaret Mayce will head to Rome to claim her new position as the International Coordinator for Dominican Sisters International, DSI. It is an umbrella organization that was founded in 1995 which gathers 150 Dominican congregations from more than a hundred countries with the goal of strengthening the communication and collaboration in the Dominican family, especially among apostolic sisters. The headquarters is in Rome, Italy.

The ironic twist is that while S. Margaret hopes to unite the voices of Dominican sisters around the world, she will do so in whispered tones. After a recent surgery, her vocal chords were left damaged. At a recent Mass at the Motherhouse, she wondered out loud to our congregation, “How can I be a preacher with only half a voice?”

Although she may talk quietly for now, her experience speaks for itself. Sister Margaret spent years working with the poor from inner city parishes in New York and in the Dominican Republic. Hoping to change economic structures that hurt the poor, she earned a Masters Degree in International Political Economy and Development from Fordham University. She most recently served as the NGO Representative at the United Nations in New York City for eleven years. 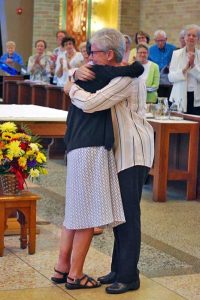 Now, she has a new mission leading DSI. Her goals? As the new DSI Coordinator, she hopes to strengthen the communication between congregations, aid sisters in theological studies in under-developed areas and engage new sisters in the worldwide Dominican family. “I am building on the relationships with sisters in DSI that I have been able to establish in the past 11 years at the UN,” she said. “I have a foundation, and I am looking forward to capitalizing on that.”

“I may be going to Rome with only half a voice, but I am bringing a heart that overflows with deep gratitude for who I am as a member of this Congregation, and an even deeper gratitude for you. For I believe that your love and support will fill in the places where I may be lacking; and so, I am confident that what I have to offer DSI will be enough. Even if it’s with half a voice.”