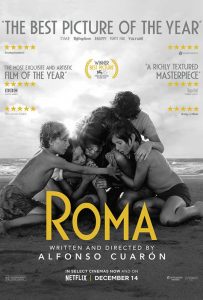 Roma refers not to the Italian city, but to a middle-class neighborhood of Mexico City, where Oscar winning director Alfonso Cuarόn (Gravity) grew up. In this semi-autographical movie, Cuarόn takes us to the home of Antonio, a doctor, his wife Sofia, and three children (Paco, Pepe, and Sofi) in the 1970’s. As the movie opens, Antonio tells his Sofia that he is going away to a conference in Canada. Sadly, it soon becomes apparent that he will not return to his family.

The main character in the movie is Cleo, a young maid, beautifully played by Yalitza Aparicio.  Cleo gets the children ready for school, cleans the house, and does the laundry, and other chores. Cleo is the one who holds the family together while they cope with Antonio’s departure.

Early in the movie, Cleo has a boyfriend, Fermin. When Cleo finds that she is pregnant, she informs Fermin, who leaves, wanting nothing to do with a baby.

Cleo returns to her daily work routine. Not knowing what to do, she tells Sofia she is pregnant and afraid. Sofia responds with compassion, taking Cleo to her own doctor, and watching out for her. Sofia and Cleo bond more closely together, as they realize they have to rely on each other for support. Both have been abandoned by men they loved.

Roma works on many levels. First, it is beautifully filmed in black and white. The dialogue is sparse, but Roma is an emotional movie. Much of the emotion is carried in the performance of Yalitza Aparicio. Her beautiful, sad eyes, and the way she moves conveys all we need to know about her emotional state. Cleo often appears to be carrying the weight of the world on her shoulders.

Roma also gives an interesting look at the life of a middle-class, urban professional Mexican family in the 1970’s. I don’t know that I’ve ever seen this before in a movie. It’s a fascinating window into this society. Cuarόn’s setting of the house seems deceptively simple, yet every piece of furniture says something about the family. Sofia’s hapless attempts to drive the car in and out of the driveway and on the streets provide some of the comic highlights of the film.

Roma is clearly the vision of Cuarόn, who not only directed, but wrote the screenplay, and also served as cinematographer. The beauty and emotional resonance of Roma will remain with you long after the movie is over. One caution is a scene of male nudity, which could have been deleted from the film.

Roma had a brief run in theaters to qualify it for the Oscars. It has opened to critical acclaim, and may well receive many Oscar nominations. It is now streaming on Netflix.

« Faith and Film: The Favourite » Dominican Volunteers USA: “A Family I’m Proud to be a Part of”