Faith and Film: The Favourite 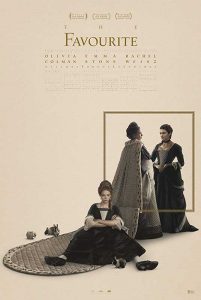 The Favourite is the story of England’s Queen Anne (Olivia Colman) in the early 18th Century. The Queen was eccentric, suffered terribly from gout, and grieved her 17 children who died at childbirth or in early childhood. As the movie opens, Queen Anne’s constant companion is Lady Sarah (Rachel Weisz). Queen Anne depended upon the counsel of Lady Sarah in state and personal matters. The two were inseparable.

One day a young woman named Abigail (Emma Stone) arrives at the Queen’s palace. Abigail informs Sarah that she is her cousin, looking for a position in the palace. Abigail’s father had fallen on hard times. Sarah hires Abigail as a kitchen maid.

Soon it becomes evident that Abigail is ambitious and takes every opportunity to be in the company of the Queen. Gradually she begins to assist the Queen in simple chores. Abigail massages the Queen’s legs with some cream to help alleviate her pain. Queen Anne is grateful and brings Abigail into her chambers more often, much to Sarah’s displeasure.

The Favourite is a tale of palace intrigue, as Abigail and Sarah vie for the Queen’s attention. The Favourite has been compared to the classic film All About Eve, a story of the rivalry between a younger ambitious actress and an aging, more accomplished one. Abagail is the ambitious younger woman and Sarah, the older woman who fears she will lose her favored status with the Queen. Another similarity to All About Eve is the biting, witty dialogue among the principal characters.

The three lead actresses give excellent performances, and will likely receive nominations for their performances. Colman’s Anne is needy, childish, and not at all adverse to flattery. Weisz is used to bullying the Queen. However, when Abigail begins to gain favor, Weisz allows the fear to show in Sarah’s face. Stone plays the not-so-innocent young Abigail who takes every opportunity to move up in the court. It should be no surprise that sexual favors are also used to gain an advantage. Be advised that there is partial nudity and sexual content in the movie.

The Favourite looks great, with stunning sets, costumes and photography. It will doubtless receive many nominations in these technical categories. Unlike other historical films, The Favourite is not slow and stuffy. On the contrary, Greek director Yorgos Lanthimos brings out the satiric, irreverent tone. I wondered if Lanthimos means The Favourite to be a satire on contemporary politics?

The Favourite is clever, well-acted, and beautiful to look at. But it’s a rather cold film, featuring largely unsympathetic, overly ambitious characters. So, if you’re looking for a heartwarming holiday movie, Green Book would be more to your liking.