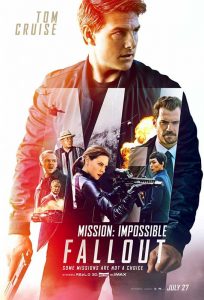 I remember as a kid watching the classic Mission: Impossible 1960’s TV series. Each episode put agent Jim Phelps and his team in perilous situations in unnamed Eastern European or South American countries. They always made it back home safely in time to fight Cold War enemies again the following week. And of course, there was the iconic theme music, as exciting as the TV show itself.

In 1996 Mission: Impossible made it to the big screen, with Tom Cruise playing Ethan Hunt, head of the Impossible Mission (IM) team, choosing to accept dangerous secret missions. The first three movies of the franchise were fairly entertaining action films. However, just as the franchise was getting stale (MI 3 was the low point), and Cruise was showing his age, something amazing happened:  the movies got better. Way better! Parts 4 (Ghost Protocol) and 5 (Rogue Nation) and now Fallout have continued to get better and better. Despite being hard to follow at times, Fallout is a hugely entertaining summer blockbuster. At 56, Cruise insists on doing his own stunts, and he is absolutely amazing, jumping from one building to another in London and hanging from a helicopter over Kashmir. I understand that Cruise broke an ankle doing his stunts. I worry about him if the series continues!

As the movie opens, Hunt and his IM team members Benji and Luther let two containers of plutonium fall into the hands of international terrorists, led by their unseen leader, a man known as John Lark. CIA chief Angela Bassett, with little faith in Hunt, assigns agent August Walker (Henry Cavill) to assist in the search for Lark. The CIA uses evil scientist Solomon Lane, whom they have in custody, to go to Paris as bait to capture Lark. An agent named Ilsa, whose allegiance is questionable, also joins the chase, intent on taking out Lane.

After a thrilling motorcycle chase through Paris, the action shifts to London, with double crosses and revealed identities. In another great action sequence, Ethan runs and leaps from building to building in London, after the bad guy. Writer-director Christopher McQuarrie keeps the action moving at breakneck speed, along with his great technical team. Even though the plot gets a little confusing at times, by the time we head into the final 30 minutes, it’s clear who is who, and what the IM team has to do to save the world.

The final 30 minutes consist of a long action sequence set in Kashmir. On the ground Benji and Luther desperately try to disarm a nuclear weapon. In the air above, two helicopters chase each other dodging mountains along the way. And, surprisingly, Ethan’s former fiancée shows up in the remote location. McQuarrie does a great job keeping this extended sequence moving, without letting up at all on the excitement. The appearance of a woman from Ethan’s past is a good twist, as we learn more about Ethan as a person. One of the reasons for the success of the last three Mission: Impossible movies is the added character development. While this dramatic element doesn’t dominate the movies, it keeps them from being solely about action and special effects.

For those who enjoy adventure/espionage movies, Mission: Impossible – Fallout is a great summer treat. There’s a good bit of PG-13 violence, none very gory or explicit, and a couple of instances of rough language. Even if you wouldn’t normally choose these kind of movies, you might give Fallout a try. I don’t think you’ll be disappointed.