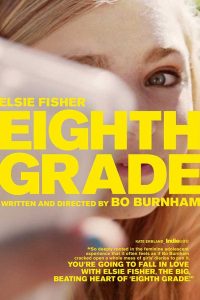 Eighth Grade is an independent movie that’s getting a lot of buzz this summer. It tells the story of Kayla Day (Elsie Fisher), a shy girl, awkwardly trying to make it through eighth grade and on to high school. Kayla lives with her single dad Mark (Josh Hamilton), who is a bit of a nerd, but tries hard to be a good father.

Kayla spends a good bit of time making her own You Tube videos, giving advice to girls her own age. In the videos she tries to sound like the confident girl she wants to be. She’s actually trying to convince herself by the videos.

Eighth Grade reminded me of a younger version of last year’s Lady Bird, in which a girl makes it through her senior year of high school. In both movies, the girls feel like outsiders who don’t fit in. Kayla knows that she is not accepted by the popular girls in her class. Part of her is OK with us, but she still wants to be accepted. At Mark’s urging, Kayla attends a pool party celebrating the birthday of a wealthy, snobbish girl. After trying her best to have a good time, Kayla is soon on the phone with her dad, pleading with him to pick her up and take her home.

Eighth Grade will appeal to anyone who felt awkward at the age of 13, which is probably the vast majority of us. Newcomer Elsie Fisher gives a good performance as Kayla, who only seems to feel comfortable listening to music on her phone or in front of her laptop. It’s amazing how much the kids in the movie all seem to be connected to some electronic device, rather than relating to each other.

Eighth Grade’s “R” rating has been the topic of discussion among some in the media. The rating comes from several utterances of profanity, as well as a rather frank discussion of sex between Kayla and a boy she likes. I wished they had toned down the dialogue so that the movie could have been released as a PG-13. But young writer-director Bo Burnham, at age 27, insists this is the way eighth graders talk, which is unfortunate.

My favorite scenes in the movie are between Mark and Kayla. Like any father and young teenage daughter, there is some tension. Mark tries too hard and Kayla rolls her eyes at him. Yet it’s obvious the two care for each other very much. In a wonderful scene late in the movie, Mark tells Kayla how terrified he was when his wife left them. He didn’t know how he would raise Kayla as a single dad. It’s one of my favorite father-daughter moments in film.

In the course of the year, we see Kayla mature. She begins to make good decisions and becomes more confident in herself. Despite its good points, I didn’t like Eighth Grade as much as I had hoped. I know some had to do with the language, but, other than the scene I mentioned above, the scenes weren’t that memorable. But maybe that’s the point. Much of life is not remarkable, but ordinary routine.