Washington, DC – Sr. Judy Morris, OP, was one of 40 Catholic faith leaders taken into police custody on February 27, 2018, in a peaceful demonstration in Washington, DC. Sr. Judy was part of an action by Faith in Public Life to demand immediate action by the House of Representatives to create a clean path to citizenship for participants in the Deferred Action for Childhood Arrivals (DACA) program, known as Dreamers. Several hundred Catholic faith leaders and laity took part in the peaceful protest. Click here to view images of the protest courtesy of Faith in Public Life.
END_OF_DOCUMENT_TOKEN_TO_BE_REPLACED 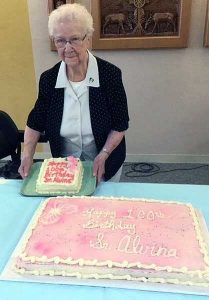 Great Bend, KS – The last hundred years have seen many, many changes in our Catholic Church. Nine new Popes, Vatican II, production of a new Catechism – even a Pope that uses Twitter! Sister Alvina Miller, OP, of Great Bend, KS, has seen all of these changes and more in her 100 years of life and 83 years of consecrated life.
END_OF_DOCUMENT_TOKEN_TO_BE_REPLACED

Dominican Sisters of Adrian Stand in Solidarity with Dreamers

March 2, 2018, Washington, DC – Four Adrian Dominican Sisters were among about 200 Catholic priests, Sisters, lay leaders, and Dreamers who on February 27 gave public witness to the Catholic call for a clean Dreamers Act that would allow a path to citizenship for young immigrants who had come to the U.S. with their parents.

Sister Elise García, OP, General Councilor, was among about 40 participants who were arrested in a nonviolent act of civil disobedience, staying in the Capitol Rotunda to pray for just and compassionate immigration legislation after the Capitol Police had warned them three times to disband. Standing in solidarity with her and with the other arrested protestors were Adrian Dominican Sisters Attracta Kelly, OP; Corinne Sanders, OP; and Heather Stiverson, OP.
END_OF_DOCUMENT_TOKEN_TO_BE_REPLACED

March 2, 2018, Chicago – Adrian Dominican Sisters JoAnn Fleischaker, OP, and Dorothy (Dot) Dempsey, OP, were part of a group of Catholic clergy and religious from Chicago who took part in a recent press conference announcing a Lenten fast in solidarity with Dreamers.

Dreamers are U.S. residents who had immigrated to the United States as children with their undocumented parents. Advocates for these Dreamers are working to pass legislation that would protect the Dreamers, who had applied for temporary safety from deportation under the Deferred Action for Childhood Arrivals (DACA) program. Many of the estimated 800,000 Dreamers had never known any nation other than the United States.
END_OF_DOCUMENT_TOKEN_TO_BE_REPLACED

Dominican Sisters of Sparkill: ‘Sisters Advocate for Immigrants’ Rights and the Rights of All People at Nyack, NY Rally’

“On Saturday, January 20, 2018, Dominican Sisters of Sparkill and friends . . . attended a Women’s and Immigrants’ Rights Rally held in Nyack, New York. The rally was held in solidarity with the Women’s Rights marches that took place throughout the country that day, and, like those larger gatherings, it took on a general human rights focus with messages, banners, and chants proclaiming the rights of all people.” Read article