Faith and Film: The Greatest Showman 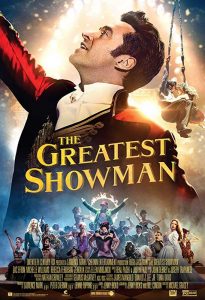 The Greatest Showman is a hit from the Christmas season, still going strong into February, quite unusual for a movie today, in which most are in and out of theaters in a few weeks. The movie is a musical biography of the 19th Century American showman P.T. Barnum, played by Hugh Jackman. Most notably, Barnum is credited with creating the modern day circus, with animal acts, acrobats, trapeze artists, and side show acts like General Tom Thumb, the smallest man on earth, and a bearded lady.

Barnum grew up as an orphan on the streets of New York, doing several odd jobs to support himself. He married his wife Charity (Michelle Williams), a woman from a wealthy family. Barnum had a great imagination and energy. One of his first endeavors was to open a museum, which was not a success. When someone suggested he add live exhibits to the museum, business picked up. As he added acts to his show, and promoted it heavily, Barnum becomes quite successful. The critics were not kind to him, but Barnum was happy that the people loved his carnival shows.

Eventually Barnum became so famous that he was invited to an audience with Queen Victoria. He attended with some of his acts, and the Queen enjoyed them. While in England, Barnum met Jenny Lind, a Swedish soprano who had become a sensation in Europe. Barnum made a deal with Lind that he would bring her on a tour of the United States. Lind agreed and the concerts were very successful.

Greatest Showman is a great looking movie, with a charismatic performance by Jackman, although with his Australian accent, I kept thinking the movie was set in Australia, not the United States. It’s a very upbeat movie, with a rags to riches story, and many musical numbers, including the Oscar nominated song “This Is Me” sung by Keala Settle as the Bearded Lady. It’s entertaining for a while, but it becomes too much. There are just too many big production numbers. A little subtlety would help.

Another problem with the music is that it all sounds very contemporary and doesn’t seem to fit the 19th Century. This is most noticeable with Jenny Lind’s numbers. As played by actress Rebecca Ferguson, Lind comes across as a 19th Century Celine Dion, which seems highly unlikely.

More than once in the movie there are speeches praising Barnum for creating a community for the “freaks” in his show (e.g. Bearded Lady, Tom Thumb, World’s Tallest Man, World’s Heaviest Man, Siamese Twins). These people were once ashamed of their appearance, but, after Barnum, they can be proud of themselves. This starts to sound a little “preachy,” playing well to contemporary audiences.

The movie is so upbeat, and Barnum is shown in such a glowing light (with the exception of a false allegation that he and Lind were having an affair) that I wondered about the cynical side of the man who claimed “there’s a sucker born every minute.”

In summary, The Greatest Showman is a mixed bag. It’s certainly a rare treat today to have a sumptuous movie the whole family can enjoy. However it’s so upbeat and high energy with so many big production numbers that it wore me down before it was over.