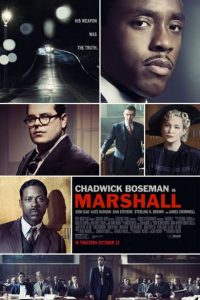 The Marshall of the title is Thurgood Marshall, the esteemed civil rights lawyer for the NAACP who tried the landmark Brown vs. Board of Education case in 1954, and in 1966 was appointed the first African American judge on the Supreme Court.

Rather than a traditional biographical movie, Marshall focuses on the early career of Thurgood Marshall, when he was the NAACP’s only attorney. Marshall traveled around the country trying cases defending people of color. As the movie opens, Marshall (Chadwick Boseman) is finishing a case in Oklahoma in 1941 when the NAACP calls, and he is soon on a train to Greenwich, Connecticut. The case on hand involves Joseph Spell (Sterling K. Brown), a Black man who works as a chauffeur and butler for a wealthy couple. Spell is accused of the sexual assault and attempted murder of the woman he works for, Eleanor Strubing (Kate Hudson).

Upon arriving in Greenwich, Marshall is met by Sam Friedman (Josh Gad) a young Jewish insurance lawyer. When the proceedings begin, Friedman accompanies Marshall to the courtroom, and introduces him to the Judge, since Marshall is not a member of the Connecticut bar. Begrudgingly the Judge allows Marshall to be co-counsel for the defense, but does not even allow him to speak in court. Friedman, who has never tried a case in criminal court, must defend Spell, with a lot of heavy coaching from Marshall.

Marshall is mainly a courtroom drama, and an entertaining one at that. Of course there are racial overtones to the case, which Marshall and Friedman must investigate. Young Marshall is a good lawyer, rather brash and sure of himself, devoted to the cause of justice for his clients. Friedman is lost in the criminal courtroom, but, with the help of Marshall, gradually gains confidence. Along with Marshall, Friedman finds himself the victim of a racial attack on the same night as Marshall. As one would expect in 1941, Friedman and his wife are worried about the War in Europe and the stories they here from relatives in Eastern Europe. By the end of the movie, Friedman and Marshall find themselves as co-workers in the fight for justice.

Marshall is a solid courtroom drama, with a very good cast. Boseman and Gad are particularly good, playing off each other well in both dramatic and comic fashion. There are overtones of “buddy” movies, in which two men who are forced to work together, eventually grow in respect and even friendship.

Marshall includes a few brief scenes between Thurgood and his wife Buster, who lives in New York. He longs to spend more time with her as they are trying to start a family. However, Thurgood knows that there are many more battles to be fought for the cause of justice, and so moves on. At the end of the movie, Thurgood arrives in Mississippi to prepare for a new trial, leaving Sam to do the final summation of the case in Greenwich. The struggle for justice continues.

Marshall contains a couple of instances of rough language, some violence, and sexuality as the sexual assault case is investigated.