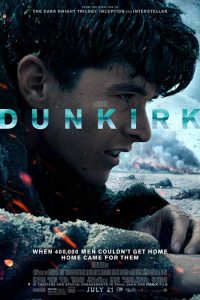 Dunkirk is the acclaimed new film from writer/director Christopher Nolan (The Dark Night, Inception) detailing one of the key moments of World War II. In May, 1940, after the surrender of France, British and French troops were trapped on the beaches of Dunkirk, a small French town on the English Channel. In the opening scene, flyers are dropped on the troops by German airplanes, telling them that they were surrounded, and encouraging them to surrender.

Over 300,000 soldiers were gathered on the beach, waiting to be ferried across the channel to England.  However, in the open they were sitting ducks waiting to be picked off by German pilots. When large Destroyers came to rescue them, they were bombed by the Germans. Because of this, the British strategy was to use small vessels, most privately owned fishing and pleasure boats, to rescue the soldiers. Because of their size and number, the small craft were much more difficult targets for German planes and torpedoes.

Nolan’s film tells the story of Dunkirk from the perspective of three British men:  a young soldier in Dunkirk (Fionn Whitehead), waiting to be rescued, a civilian (Mark Rylance) who takes his small boat to assist in the rescue, and a pilot (Tom Hardy), trying to fight off the German planes. Nolan’s strategy works very well. It gives the film an intimate feel. These three men and their comrades tell the story of all those involved in the rescue. Nolan interweaves the story of these three in a seamless fashion.

This is one movie I recommend seeing on a large screen. The panorama of troops, large naval vessels and small boats and planes in the air is astonishing. There are dogfights in the air, sinking ships in the sea, and small boats picking up stranded soldiers. Technically, Dunkirk is exceptional across the board. The cinematography, film editing, special effects, sound, and Hans Zimmer’s score, are all exceptional. I expect Dunkirk to be nominated in many of these categories.

Other things are worth noting about Dunkirk, in comparison to most other contemporary war movies:  while there is of course some violence, it is not the bloody, gory violence one might expect. Also it’s very noteworthy that the film is under two hours in length. At a time when most “epic” movies last well over two hours, the fact that Nolan tells this amazing story in under two hours is quite a feat.

There are many memorable scenes in the movie:  men falling face down on the beach as fighter planes shoot at them, a shell shocked soldier rescued by a small boat, volunteers serving tea and sandwiches to soldiers on a ship that has suddenly hit by a torpedo, and a lovely sequence of a fighter plane, out of fuel, gliding over the beach. Nolan balances large scale action scenes with more intimate moments throughout the movie. He conveys the scope of the event, yet keeps the audience emotionally involved.

There’s very little dialogue in Dunkirk. The story is told in the action and the faces of all those involved. A minor quibble:  because of all the background noises, and the many accents, I found it hard to understand a good bit of the dialogue. Although it’s in English, subtitles would have helped!

Even though the film celebrates the combined efforts of many working together to rescue the stranded men, all were not treated equally. On more than one occasion, French soldiers were told they had to wait until the British were rescued before they would have a chance for rescue. In one scene a French soldier who refuses to speak and reveal his accent is ridiculed by the British troops who surround him on a ship. These moments remind us, that even with the remarkable sense of common humanity in the rescue, all was not perfect.

Dunkirk is a very fine film telling of courage and fellowship in a critical moment in World War II. I think it will be a top contender this for the major awards this year, and not just in the technical categories. Christopher Nolan is a talented, commercially successful filmmaker who has not yet won an Oscar. With the critical and commercial success of Dunkirk, this may be his year.

« ‘Racine Dominicans Continue to Fight Human Trafficking’ » The Spirit of Collaboration in the North American Dominican Promoters of Justice, Peace and Care of Creation