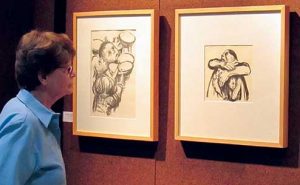 August 4, 2017, Adrian, Michigan – Dominican artists – visual artists, sculptors and potters, poets, photographers, film-makers, dancers, and other artists – gathered at the Weber Retreat and Conference Center in Adrian July 26-29. The theme for the Gathering, “Response,” reflected the call of the artist to respond to instances of social injustice.

Sister Suzanne, a photographer and teacher, followed up on the theme July 27 in her keynote address, “The Art of Käthe Kollwitz.” Making extensive use of slides of the German expressionist artist’s drawings, etchings, and sculptures, she explained how Kollwitz used her art to respond to the injustices of her day.

The keynote address was delivered during the same month as that marked the 150th anniversary of Käthe Kollwitz’s birth. The artist died on April 22, 1945, a few days before the end of World War II.

“Käthe Kollwitz lived through imperialism, economic depression, the Industrial Revolution, and two world wars,” Sister Suzanne said. “She developed as an artist and maintained a specific vision as a compassionate social critic, advocate for women and children, and peacemaker. We might even say that she was the conscience of Germany during those perilous years.”

Sister Suzanne noted that Kollwitz had a particular love for people of the working class and for the women of her day, portraying them realistically, as she saw them, and not the idealized versions sometimes seen in art. She lived through a time of great promise for women – the early 20th Century – but also a time, with the rise of Adolph Hitler, when many of the gains made by women were taken away.

“For Käthe Kollwitz, awareness of social injustice and commitment to action were focused and integrated, and they reflected a change in her consciousness,” Sister Suzanne said. A turning point in Kollwitz’s life was the death of her son Peter on the Belgian front during World War I. She became a pacifist, portraying the senselessness of war and the grief of parents who lost their children in war.

Sister Suzanne concluded her address by inviting the artists to view reproductions of Kollwitz’s work, which were on display in INAI, which houses a gallery adjacent to Weber Center. This building had once been the studio of Sisters Barbara Chenicek, OP, and Rita Schiltz, OP, who for about 40 years had designed worship spaces for parishes, religious congregations, hospitals, and other entities. A panel discussion on art therapy followed.

Father Rudolf presided at the closing Liturgy on July 28. In her reflection, Sister Barbara Cervenka, OP, (Adrian) noted the diversity of artists at the gathering: poets, musicians, painters, photographers – focusing on Jesus, the storyteller.

“Jesus seemed always engaged by the mystery at the heart of things,” Sister Barbara said. “He noticed the preciousness of a single bird and the fleeting beauty of flowers. He urged his disciples to see, to pay attention, to live in a world where the miraculous bloomed in the everyday, where God’s presence was so palpable that everything spoke of it.” Artists, she added, “are invited to inhabit and share that world. … We are called to notice and hear the word of God spoken and writ large on the face of the earth.”

At the end of the Mass, Sister Janet Wright, OP (Adrian), painter and art teacher, received the Fra Angelico Award, the highest honor that the DIA bestows on its members.

In making the presentation, Sister Barbara Schwarz, OP (Amityville), President, said that Sister Janet’s paintings “reflect the voice of God found in nature. Painting is her passion, and spirituality is very much woven into her art.” Sister Janet’s paintings can be seen throughout the Adrian Dominican Motherhouse, and one of her paintings, of corn, adorns the second volume of Adrian Dominican history, Seeds Scattered and Grown, by Sister Nadine Foley, OP, former Prioress of Adrian, who died in May 2017.

Sister Barbara also mentioned Sister Janet’s dedication to teaching art. “For almost four decades, she nurtured the love of art in high school students and for the past 14 years she offered weekly painting classes to the Sisters of Mercy,” Sister Barbara said. In addition, Sister Janet has been active in the DIA, serving on many planning commissions for the Gatherings.

Sister Mary Boyce, MM (Maryknoll), received the Spirit Award for her service to the DIA. Sister Mary “has been educating and empowering the poor in the United States and in foreign missions,” said Sister Mary Pat Reid, OP (Caldwell).

Sister Mary Pat compared Sister Mary’s devotion to the poor to that of Sister Dorothy Stang, a Sister of Notre Dame de Namur, who had been killed in the Amazon Rainforest in 2005, defending the rights of the local people. Sister Nancy Murray, OP (Adrian) had portrayed Dorothy Stang’s life earlier that day.

Sister Mary was also honored for her service to the DIA as Vice President, and for helping whenever asked “with a radiant and open-hearted spirit.”

Dominican Artists from eleven Congregations and the US Central and London Provinces attended this year’s Gathering. One of the highlights of our time together was sitting with each other and sharing our individual art form and talking about what motivated us to create the piece(s). It is in this sharing with each other that we give and receive encouragement, mentoring and affirmation of who we are as Dominican Artists who continue to preach God’s Word through our art.