Faith and Film: The Lost City of Z 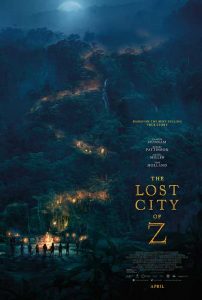 The Lost City of Z is the engrossing true story of British adventurer Percy Fawcett (Charlie Hunnam) who lived in the early 20th Century. When the film opens, Percy, who has experience with mapmaking, is offered the opportunity to travel to South America, to chart the disputed boundary between Brazil and Bolivia. The journey would be long and dangerous, deep in the jungle. Percy discusses this with his wife Nina (Sienna Miller) who is pregnant with their first child. They both decide that Percy should go on this expedition, even though he would miss the birth of their child.

Percy loves the adventure and the jungle. Along with his small group of fellow travelers, they travel far into the Amazon region, navigating both the dangerous rapids and the arrows of the native tribesmen. Percy gains an admiration for the indigenous people, and defends them on his return to England, where even educated members of the Royal Geographic Society consider them to be “savages.” Percy also hears rumors of a fabulous lost city of Z, which he is determined to find.

After spending time with Nina and their young son Jack, Percy is off for another adventure in the jungle. Once again, he leaves Nina expecting another child. By now he routinely and fearlessly engages native peoples along the way, befriending them and learning from them. He listens to their stories of Z with great interest. Far from savages, the indigenous cultivate the land in order to grow crops in the jungle. Percy continues to grow in admiration of the people.

At the conclusion of the second expedition, Percy returns home. Jack is older and has a younger brother, and eventually a sister. Nina and Jack become angry with Percy for his lengthy absences from the growing family. By this time World War I has begun, and Percy must leave again, this time to fight in the Great War. Percy is wounded in battle, and exposed to gas, causing him to temporarily lose his sight. He returns home to recover. Eventually he regains his sight. This extended period of convalescence allows Percy to spend time with the family, healing the tensions over his absences.

In 1924, Jack surprises Percy by suggesting that they return to South America for one more journey in search of Z. Percy had not planned to return, yet Jack persuades his father and Nina agrees to the trip. Father and son sail one last time to the Amazon. (Spoiler alert!) Percy and Jack disappear deep into the jungle, not to be seen nor heard from again. Writer/director James Gray speculates on their fate, but it remains unknown.

The Lost City of Z may sound similar to many other swashbuckling adventure movies like Indiana Jones, but Z is a much more thoughtful movie. At 2 hours, 20 minutes, it’s a bit long. If anything, Gray could have limited the World War I battleground scenes, which seem out of place. Gray does a good job capturing the sense of awe and discovery that Percy and his mates feel in this new world. Again and again we see Percy as an honorable man in his respect for the environment and, notably, the indigenous people. Hunnam, an actor I did not know, does a fine job as the admirable Fawcett.

I also liked the movie for giving due time and attention to Percy and Nina’s family life. They deeply love one another, yet Percy also loves his expeditions, which lasted for many years. These separations were very hard for the family, yet, somehow, they seem to be what Percy was meant to do with his life. Nina lets Percy know that facing childbirth alone more than once, and raising three children while he was away was as courageous as his expeditions!

The film is unexpectedly moving, especially the final scenes between Percy and Jack, facing the real possibility of death. In these scenes, father and son express their love for each other and gratitude for the life they led.

I liked this movie very much. It features beautiful scenery and virtuous characters who affirmed the dignity of others. The movie has some violence, although less than one might expect, and partial nudity among the indigenous peoples.