May 5, 2017, Washington, D.C. – A number of Adrian Dominican Sisters, Associates, and friends braved the heat and crowds of Washington, D.C., to express their commitment and concern for Earth and her inhabitants. The group – along with students from Siena Heights University in Adrian – were participating in the People’s Climate March on April 29.

The crowd was estimated in the tens of thousands, and some say up to 200,000 people took part in the march, which was organized into eight blocs of activists. The march coincided with the 100th Day in office of President Donald Trump – and of the Feast of St. Catherine of Siena, great Dominican mystic and reformer.

Sister Janet Stankowski, OP, and Patty Gillis, an Adrian Dominican Associate, were among the staff members and supporters of Voices for Earth Justice (VEJ), an interfaith network of people who care for Earth. Their group marched as part of the Defenders of Faith bloc.

“I wore my Dominican scarf in honor of the Feast of St. Catherine of Siena,” Patty said. “I felt her energy in all the caring people taking their concerns to the seat of power, much like Catherine did in the Middle Ages.”

Patty said she was uplifted to be among the indigenous peoples who took part in the march, and among people of so many faith traditions. “They reminded us all that Care for Creation is a moral and spiritual issue.” She was also pleased to see the influence of Pope Francis on many participants through his picture and quotes from his encyclical, Laudato Si, on banners carried through the streets of Washington, D.C.

“The People’s Climate March was very impressive, with many, many activists,” Sister Janet said. “We stood in respect as the indigenous communities and Protectors of Justice prepared to lead the March. They were followed by the immigrants, water keepers, and Creators of Sanctuary.” In all, Sister Janet said, her participation in the Climate March was “a meditative, powerful, and hopeful experience.” 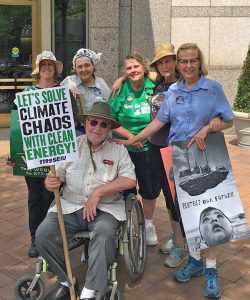 Members of the group from Adrian – marching with the Defenders of Truth group – also found the Climate March to be a hopeful experience, in spite of the urgency of the climate change issue and challenges such as the 90-degree heat, crowds, and the difficulty of traveling to the march site.

“It’s so hopeful, because you are out there with all these people and you think, ‘Wow, these are all people who care about the same things I do, and there are so many of us,’ ” explained Sister Kathleen Nolan, OP. She is the Director of the Adrian Dominican Congregation’s Office of Justice, Peace, and Integrity of Creation. “How can [the March] not make an impact?”

Sister Kathy – along with Sister Maurine Barzantni, OP, and Holly Sammons, Dominican Volunteer – were impressed by the kindness of the people they encountered, whether at their hotel or among other participants, in spite of the discomfort and inconveniences.

They were also impressed by the commitment of so many people, not only at the People’s Climate March, but the weekend before, at the science march and at a May Day demonstration in Chicago. “Week after week, the crowds continue to come out,” Sister Kathy said. “The energy hasn’t lagged.”

Sister Maurine saw the interconnectedness of issues represented by many of the marchers, from Black Life Matters activists to indigenous peoples who carried signs such as “Don’t Break Treaties.” But the various agendas “all fit under the same category – respect for our world and respect for the inhabitants of our world,” Sister Maurine said.

In general, the participants from Adrian came away from the People’s Climate March with a renewed commitment to caring for Earth – and a greater sense of a culture of respect. Sister Maurine said the message she would like to bring to others after her experience of the march is that “people desire to respect the Earth and everything in the Earth and on the Earth.”