Faith and Film: The Gift 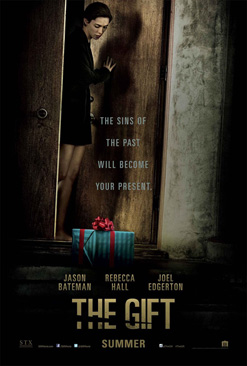 “The Gift” is a clever little thriller that has generated positive buzz at the end of the summer season. It’s worth checking out.

I liked “The Gift” for several reasons. The main reason is that it surprised me. When I thought it was going in a fairly predictable direction, “The Gift” surprised me by moving in a different direction. I also liked the fact that, for a thriller, it has very little physical violence. It does have plenty of tension and suspense as the story gets darker and more complex. “The Gift” does leave a lot for the imagination, which is a good thing.

“The Gift” tells the story of married couple Simon and Robyn (Jason Bateman and Rebecca Hall) who have just moved from Chicago to California. Simon is returning to the area where he grew up and went to school. While Simon and Robyn are shopping for home furnishings, a man approaches Simon, saying he went to school with him. Simon doesn’t appear to remember the man, Gordo (Joel Edgerton) at first, but then recalls him as the guy they called “Weirdo.” The socially awkward Gordo latches on to Simon and Robyn, showing up uninvited and leaving gifts on their driveway. Finally, Simon has had enough and tells Gordo to leave them alone.

At this point, I thought that “The Gift” would turn out to be a rather conventional thriller. Simon and Robyn’s dog disappears. Robyn, who works from home, hears strange noises during the day. I assumed it would turn out that Gordo would go ballistic and attack the couple. I don’t want to give anything else away, except to say that “The Gift” doesn’t take the expected path. Robyn begins to wonder if Simon’s story that he barely remembers Gordo may not be entirely truthful. What follows is unnerving. Edgerton’s screenplay reminds us of the power of sin in human lives. The ending is one of those “what just happened?” moments that will result in many rewinds on DVD to catch it again. What makes the last 10 minutes so good is that it’s a surprise, but, on retrospect, makes sense.

Edgerton not only plays a major role, he also wrote and directed “The Gift.” He’s good as Gordo who, like the weird kid in school is a little creepy, but also a little sympathetic. As a filmmaker, Edgerton’s writing and directing brings out the chills and surprises. There’s also an understanding of the negative, lingering effects of sin, which made the movie interesting from a religious perspective.

« Faith and Film: Ricki and The Flash » Dominican leaders meet and greet at LCWR