Faith & Film: Guardians of the Galaxy 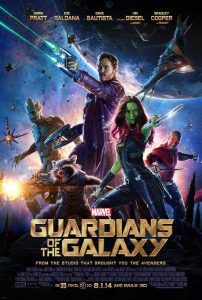 After seeing a couple of serious dramatic movies, I decided that Labor Day Weekend would be a good time to catch up on the summer’s biggest hit, “Guardians of the Galaxy.” It’s a comic book adventure movie that has received good reviews and word of mouth.

I can understand the appeal of “Guardians.” Many “comic book” movies are long and dark (e.g. the recent Batman movies). “Guardians of the Galaxy” is relatively short at only two hours and does not take itself seriously. In the movie, our hero, Peter Quill (Chris Pratt), was mysteriously taken from his mother’s death bed on Earth in 1988 as a boy. He travels to a far away galaxy where he becomes an adventurer.

The plot involves an orb which Peter attains. The orb has some special power, and the villain Ronan will do anything to get it. A motley crew including Gamora, a woman who was kidnapped by Ronan; Drax, a hulking man whose wife and daughter were killed by Ronan; Rocket, a genetically engineered raccoon bounty hunter; and Groot, a kind of “tree-man,” join Peter in his efforts to keep Ronan from obtaining the orb.

James Gunn directed “Guardians” and co-wrote it, along with Nicole Perlman. Gunn and Perlman borrow heavily from classic sci-fi movies like “Star Wars.” Peter and Rocket share a kinship with the amoral, wise-cracking adventurer Han Solo, while the large, inarticulate Groot resembles his loyal sidekick Chewbacca. The use of 1970s–1980s pop/rock music also grounds “Guardians” in the “Star Wars” era. There’s even a funny reference to Kevin Bacon in “Footloose.” The music which Peter carries around on a Walkman contributes greatly to the retro-funky feel of the movie. Yet the music also holds a sentimental value, since it was recorded on a cassette tape by Peter’s deceased mother.

Despite these welcome touches, there’s not a lot of substance to “Guardians.” Even in a comic book movie, characters need to be fleshed out and plot details explained. The Guardians come together to sacrifice their lives in their battle against the enemy. That’s admirable, but I never really understood what the orb was, and why it was so important to keep it from Ronan. Furthermore, as contemporary villains go, Ronan doesn’t seem very menacing.

Even though I was willing to go along with the good-natured, offbeat ambiance of “Guardians” for its first hour, I began to lose interest about halfway through. After this point, there wasn’t much to keep me engaged. It’s as if Gunn and Perlman ran out of creative energy. Or maybe they didn’t want to divulge too much so that the audience will return for the promised sequel(s). I’m willing to bet that the identity of Peter’s father will be revealed in the sequel, as the identity of Luke’s father was revealed in the sequel to “Star Wars.” Time will tell.