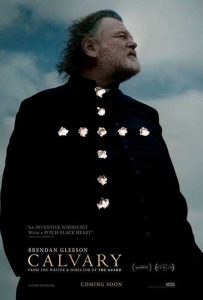 During the week, Fiona, Fr. James’ adult daughter, comes to visit. We find out that Fr. James is a widower who entered the priesthood later in life. His daughter is dealing with her own mental health issues, and Fr. James wants to spend time with her. Despite her own problems, Fr. James is clearly happy to have his daughter with him.

“Calvary” is an intense and disturbing film. Fr. James, well played by Brendan Gleeson, must go about his duties in the parish. He presides at Mass the day after the confession. As we see the faces of the parishioners, we wonder if one of these is the potential killer. Certainly, that’s in the mind of Fr. James too, as the congregation comes forward for Communion. During the week, he ministers to the sick and dying, sees a very troubled couple, and visits a wealthy man with his faith issues.

Many of Fr. James’ parishioners are unlikable. They are cynical and angry. The sexual abuse crisis has certainly had its effect on the people of this Irish town. The parishioners treat Fr. James with disrespect, even contemptuously. Only an older, dying man and a visiting French woman, the wife of a man who was critically injured in an accident, seem like decent people. In the midst of it all, Fr. James tries to see the good in people and preaches God’s unlimited forgiveness.

As the week progresses, Fr. James begins to show signs of the strain he’s under. On Saturday night, he comes close to breaking, has too much to drink at the pub, and shoots a gun at the bar. Sunday morning is near. Will it be his final day?

I liked much of “Calvary.” Writer-director John Michael McDonagh shows a good feel for the joys and strains of pastoral ministry. Even though the question of Fr. James’ potential killer is always before us, the movie does not play out like an ordinary whodunit. There’s a pall over the film, with so much anger and cynicism expressed by so many of the parishioners. The sexual abuse scandal has certainly tarnished the image of the church in Ireland and beyond. Will trust in the Church and its priests soon be restored? Or will the good priests, like Fr. James, always be looked upon with suspicion?

How does Fr. James continue his ministry under such conditions? How does he believe in the goodness of people and not lose his own faith? Two millennia after Jesus, we wonder if another good man will have to give his life for the sins of others.

Without giving away the ending, prospective viewers should be warned that it is quite disturbing. While there is a good bit to recommend in the film, not the least of which is the fine performance of Brendan Gleeson, it is not an easy movie. “Calvary” raises difficult questions. Still, as uncomfortable as it is, I would like to see “Calvary” again. McDonagh is a good writer, and his dialogue often has a poetic quality to it. Fr. James speaks so beautifully about a merciful God, even in the midst of his great inner turmoil.

In the final seconds of the film, there’s a fleeting image of mercy and forgiveness. It comes so quickly that it can be easy to miss. But it’s definitely there, a Gospel message for our troubled world.