Faith and Film: If Beale Street Could Talk 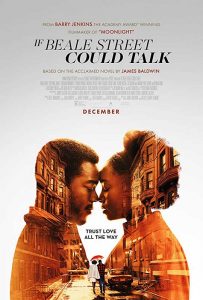 If Beale Street Could Talk is a beautiful adaptation of the book by James Baldwin. The story takes place in 1970’s Harlem. It’s the story of the love of Alonzo “Fonny” Hunt (Stephan James) and Tish Rivers (KiKi Layne). Tish and Fonny have known each other since they were small children, and always been close. Their relationship turns romantic when Fonny is 22 and Tish is 19. Tish becomes pregnant and the couple move into a small apartment together. Soon afterward, Fonny is arrested and falsely charged with rape. Fonny is jailed while Tish and her family hire an attorney and do all they can to get the charges against Fonny dropped before the baby is born.

Beale Street is the first film to be directed by acclaimed filmmaker Barry Jenkins since his Oscar winning Moonlight. It does not disappoint. Technically, it’s a stunning film. The photography is excellent. Jenkins uses the camera with fluid movement to bring viewers in and out of the story. Sets and costumes are evocative of the 1970’s. The score is also lovely, combining blues, jazz, and a romantic sound.

Beale Street is lovely and tender as it focuses on the young lovers. It’s also an angry film, exposing the racism and injustice that lands Fonny in jail. His well-meaning white lawyer constantly runs up against brick walls as he tries unsuccessfully to prove his client’s innocence. It’s a great accomplishment that writer-director Jenkins does not shy away from the racial injustice, but the film is never consumed by hatred or bitterness.

There’s a very interesting spiritual side to Beale Street as well. Fonny’s mother and sister are fundamentalists. When they learn that Tish is pregnant, they claim that she is possessed by evil, trying to bring down Fonny. Yet, through everything, Fonny and Tish have a spirituality of love and hope. The final scene includes a table prayer with Fonny, Tish, and their son.

The performances are all excellent. As the young lovers, Stephan James and Kiki Rivers give fine performances. They are backed by a strong cast, with Regina King a standout as Tish’s mother, Sharon. King has a memorable scene in which she flies to Puerto Rico to search for the rape victim to convince her to tell the police that Fonny is innocent.

If Beale Street Could Talk is a very fine movie that works both as a period piece, but also one which seems very contemporary with its themes of racism and injustice. It’s a surprisingly hopeful movie for our time.

The movie is rated R for sexuality, and rough language.