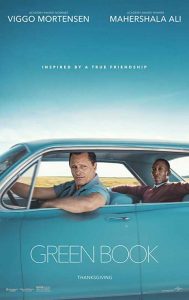 Green Book is a likeable movie which is emerging as one of the favorites for the Oscars this year.

Green Book is based on the true story of the unlikely friendship between Tony “Lip” Vallelonga (Viggo Mortensen), an Italian-American New York nightclub bouncer, and Dr. Don Shirley (Mahershala Ali), an African American pianist. In 1962, Dr. Shirley is scheduled to embark on a two-month tour with his trio that would take him into the Deep South. Dr. Shirley hears about Tony, and his reputation for toughness, which he may need in the segregated South. The club where Tony works is closed for renovations, so he goes to meet Dr. Shirley. Tony is hired. The two set out on their journey.

Green Book has been compared to the classic Driving Miss Daisy and it’s not a bad comparison. Tony and Dr. Shirley are very different people. Dr. Shirley is well educated (he has three doctorates) and cultured. Tony is tough and street smart. Dr. Shirley is lonely. He is estranged from his brother, who is his only living family member. On the other hand, Tony loves his wife, two boys, and a large extended family. But, in their time together, the two grow in respect, and even friendship. We learn at the end of the movie that after their time together, the two become lifelong friends.

As expected, the two run into problems with the blatant racism in the South. Tony grows to appreciate the courage of Dr. Shirley who booked the tour in order to pave the way for other African American performers in the South. The two learn from each other how to handle difficult situations:  Tony with his toughness, and Dr. Shirley with his patient endurance for the sake of the greater good.

If it feels like we’ve seen this kind of story before, we have. One of Hollywood’s favorite plot lines puts two unlikely characters together who eventually become friends. So, it’s not a surprise that Tony and Dr. Shirley overcome their differences and become friends. The tour of the Jim Crow era South is not surprising either, as painful as it is to see. What makes the movie work is the performances by Mortensen and Ali. Mortensen is loud, brash, and funny as Tony. Ali is snobbish and proper as Dr. Shirley. Of course, they learn from each other. In one of the funnier scenes, Tony teaches Dr. Shirley how to eat Kentucky Fried Chicken in the car. On the other hand, Dr. Shirley helps Tony write love letters to his wife. Both Mortensen and Ali give award worthy performances.

Director Peter Farrelly is best known for his crude, outrageous comedies like There’s Something about Mary and Dumb and Dumber. Green Book is a departure for him. Farrelly’s comedy instincts come into play as he expertly brings out the humor in the characters. The pervading sense of humor keeps the movie from being overly serious and preachy.

Green Book is an entertaining and reflective story of friendship overcoming racial and cultural boundaries in the early 1960’s. Two very different people find their common humanity and learn from each other. We can still learn a lot from Tony “Lip” and Dr. Don Shirley almost 50 years later.