Faith and Film: Can You Ever Forgive Me? 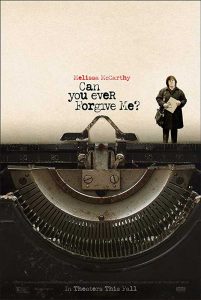 Can You Ever Forgive Me tells the true story of Lee Israel (Melissa McCarthy), a writer of biographies in the 1980’s-1990’s. Lee was moderately successful in her writing. As the film opens, she is planning to write a biography of entertainer Fanny Brice, although her agent and publisher show no interest in the project.

Lee is running out of money, and needs to find some way to pay the rent. In her research on Fanny Brice, Lee comes across a letter written and signed by Fanny. She takes it to a book store. The owner tells Lee she will buy it for a modest amount. However, the letter would be worth a lot more if it was more substantial. Lee forges a P.S. on the letter, and sells it to the book store. Seeing this as an easy way to make some money, Lee begins to forge other letters by literary celebrities, including Noel Coward and Dorothy Parker. She soon is selling these forged letters and signatures for several hundred dollars apiece.

Lee finds a partner in crime in Jack Hock (Richard E. Grant), a flamboyant homeless gay man. Eventually, their luck runs out on them as Lee and Jack are arrested for fraud. It’s amazing how long they got away with their scheme. Lee even writes a book about her forgeries, called Can You Ever Forgive Me?

The title is ironic, since Lee really doesn’t care what anyone thinks of her. She’s not a likeable character at all. Lee isn’t interested in anyone else but her cat. In the opening scene, she steals a coat from a coat check room. She drinks too much and has a foul mouth.

I think it’s very hard to play an unsympathetic character, but Melissa McCarthy pulls it off. Best known for her comic performances, McCarthy is very good as Lee. She rarely smiles, looks rumbled in her old clothes, wears no makeup, and is gruff to people. Yet, underneath all this, McCarthy shows the loneliness of Lee, without trying to make the audience feel overly sympathetic.

Jack is not much better. His friendship with Lee is odd. Jack also keeps people at a distance and takes advantage of Lee at a crucial point in the movie. He’s addicted to cocaine. But then Lee seems only marginally interested in Jack, except to have someone to help her sell her forgeries. Richard E. Grant has been a character actor in movies and television for many years. I’ve never noticed him before, but you can’t help noticing him here in a great performance. Like McCarthy, Grant finds the humanity in Jack. But he also doesn’t make him too likeable either. Even though the movie is about forgery, there’s nothing phony about either performance.

It’s hard to like a movie about unlikeable people. So, I’m not sure I liked Can You Ever Forgive Me? But I did appreciate the fine performances, writing, and the atmospheric scenes of cluttered New York bookstores 25 years ago. And the unusual story of Lee which is unbelievable, except that it’s true.

The movie is rated R for language and drug use.