Faith and Film: I Can Only Imagine 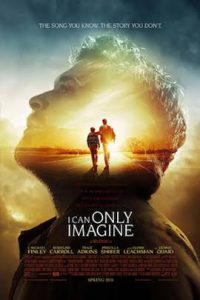 I Can Only Imagine is a faith-based film that has become a surprise hit this spring. It tells the “story behind the story” of the song of the same name which became a popular hit for the Contemporary Christian music group MercyMe a few years ago.

The film tells the story of Bart Millard (J. Michael Finley), lead vocalist of MercyMe, who wrote the song as a tribute to his late father. Bart was raised in rural Texas by his father Arthur (Dennis Quaid) and his mother Adele. Arthur is angry and both physically and verbally abusive to Bart and Adele. When he was a young boy, Adele took Bart to a church summer camp to get him out of the house. Bart enjoyed the camp, where he met Shannon, whom he will eventually marry. When camp was over, Bart returned home and was shocked to find that Adele had left.

In high school, Bart played football. As hard as he played, Bart could never measure up to Arthur. In one game, Bart broke both ankles. His football days were over. Looking for another extra-curricular activity, Bart joined the glee club, first as their sound man, then later as a singer. At the encouragement of the glee club director, Bart auditioned for the lead in the high school production of Oklahoma. Everyone congratulated Bart on his fine performance except Arthur. Expecting his father’s disapproval, Bart didn’t even tell Arthur about the play. Gaining confidence in his vocal abilities, Bart also began to sing in church.

During this time, Arthur was hospitalized after passing out at a diner, and was diagnosed with cancer. He refused treatment and went home, telling Bart that there was nothing wrong with him. As their relationship continued to deteriorate, Bart left home after graduating from high school, determined never to see his father again.

Bart joined a band, traveling through Oklahoma, with modest success. They hired Brickell (country singer Trace Adkins), as a manager who helped them get concert dates. Eventually the band made it to Nashville where Brickell arranged for some record producers to come to their concert. The young men were devastated when they learned that none of the producers wanted to sign them. Brickell told Bart that, while his music was good, the music was not coming from his heart. Bart told Brickell about his estranged relationship with his father. Brickell encouraged Bart to go home and deal with Arthur. Bart informed the band of his plans to take a leave.

When he returned home, Bart was surprised to find Arthur a changed man. He was attending church and was genuinely interested in his son. Arthur asked Bart if he got the letters he sent him. Bart admitted that he never opened them. Bart was naturally skeptical. He also learns that Arthur’s cancer had advanced while he was gone. Bart and Arthur go to church together and grow closer than they had ever been. After Arthur dies, Bart genuinely grieved his passing. As a tribute to Arthur, Bart wrote the song “I Can Only Imagine.” Brickell loved the song, and told Bart that he has finally found his voice. Bart’s band, now named MercyMe, recorded the song, which became a huge hit.

I Can Only Imagine benefits greatly from Quaid’s performance as the angry, abusive Arthur, who eventually does change his ways. He is truly frightening throughout most of the movie. Yet his conversion seems genuine as he reconnects with his son. However, it’s never clear why Arthur is so angry and lashes out at everyone. I also wondered why Arthur was never reported for his domestic abuse. Why did his mother never report the situation, even after she left and was safe? Or the grandmother that Bart loved so much? Or any number of other people who must have known? Even though most of the violence is off screen, it’s still disturbing.

It’s easy to see why the movie has become a crossover hit, appealing not only to Evangelical Christians, but also to a wider audience. Bart’s story is inspirational, and while the Christian theme is certainly present throughout, it’s never heavy-handed in its approach. At its core, I Can Only Imagine is about a wounded relationship between a father and a son that, through grace and forgiveness, finds healing. Certainly there are many fathers and sons who could find inspiration in that message.

If you’ve never heard the song that is at the heart of the movie, I encourage you to Google it. Listen and wonder what heaven is like for your deceased loved ones, and will be for you one day.