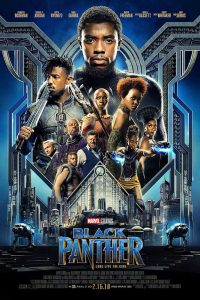 I can’t remember any time in the last decade that a movie has opened with so much interest as the eagerly anticipated Black Panther. Not only has it been the subject of many media stories, but it has opened to great reviews, huge numbers at the box office, and long lines at the multiplexes. This is even more amazing for a movie opening in February, traditionally a slow month for movies.

Young director and co-writer Ryan Coogler must have felt an enormous weight taking on Black Panther. As the first African superhero, many from the entertainment industry followed every aspect of the production and were eager to see the finished product. If the movie was not a success, it would be a huge disappointment to many. As we now know, any fears about Black Panther’s success were unfounded.

T’Challa assumes the great strength of the Black Panther when he dons the special panther suit. However, unlike other comic book superheroes, T’Challa does not go around fighting crime. As a king, he prefers to rule his country in peace.

Things change when T’Challa is challenged by his rival Erik Killmonger (Michael B. Jordan), a foreigner who comes to Wakanda. The strong, charismatic villain Killmonger seeks to take over the nation to use its resources for his own purposes for world domination.

The above is an oversimplification of a very complex plot. Since this is the first episode in what is certain to become another Marvel superhero movie franchise, Black Panther takes a lot of time explaining the origins of its characters and setting the plot in motion. Since I knew almost nothing of Black Panther, I found the first part of the movie difficult to follow. The screenwriters could have done better setting the stage and establishing the characters. However, with patience, I was able to catch up (sort of) as the story unfolded.

The movie is heavy for a superhero film. Themes of honor, family, country, betrayal and forgiveness abound. It’s almost Shakespearean! Coogler could have used more light touches. I loved the character of Shuri (Letitia Wright), T’Challa’s younger sister, who is a technology and gadget guru. Her interactions with her brother, teaching him to use his gadgets or drive a car, are highlights of the movie. Wright steals every scene she’s in!

It’s refreshing to see that, along with Shuri, Black Panther includes many other strong female characters. They include T’Challa’s love interest (Lupita Nyong’o), mother (Angela Bassett), and many female warriors (like last year’s Wonder Woman) are important figures in the movie. These women make a great contribution to the cast.

In summary, there are many elements I liked about Black Panther. It is certainly more an ambitious movie than other movies in the genre. However, it tries to do too much. Weighed down by its serious tone, overly complex plot, and 2 hour, 20 minute length, Black Panther only partially succeeds. Despite my thoughts, there’s no denying that Black Panther has become something of a phenomenon this year!

Note:  Don’t leave the theater before the end of the final credits. There’s a good scene with T’Challa at the United Nations.