The McGreal Center’s 10th anniversary evokes so many gratifying memories. This article recalls one of the decade’s most enjoyable experiences –the In Our Keeping Conferences. The year 1984 marked the first In Our Keeping Conference (IOK) held at Sinsinawa. A variety of motherhouses hosted subsequent gatherings:  Racine (1986 & 1988), Amityville (1991) Adrian (1994) Kentucky (1996). Columbus held the 2000 IOK, which appeared to be the last one. Yet with the establishment of the McGreal Center, this popular conference materialized again in 2008, 2010 and 2012. In those few years, the IOK Conference attracted Dominicans from all over the world – the Philippines, Norway, France, Argentina as well from 13 states. 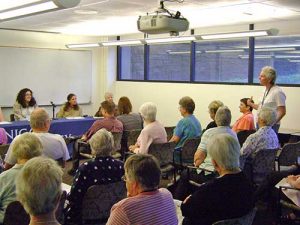 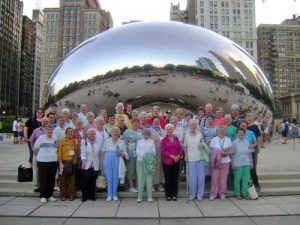 The IOK Conferences provided beautiful prayer experiences and inspiring preachers. We consumed delicious meals and enjoyed the magnificent city of Chicago – a visit to the Chicago History Museum, a scenic cruise on the Chicago River, concerts in Millennium Park and the traditional visit to the sculpture the Cloud Gate (AKA The Bean). We had fun! Participants formed a joyful and flexible community. The integration of community, prayer and study created an exquisite experience of Dominican family. 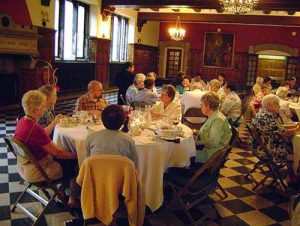 The 2012 Our Keeping Conference was the final IOK; nevertheless, it provided a remarkable last hurrah! The last evening we honored the Parable Conference for Dominican Life and Mission (1776-2008). Our celebration included a very memorable Vespers, a festive dinner and abundant laughter. Parable was the first Dominican organization in the United States to promote and facilitate collaboration among the whole Dominican Family. Present at the celebration were many of the founders of Parable: Marie Amanda Allard, former prioress of the Sinsinawa Dominicans, Jerry Cleator, former Provincial of the Central Province, and past directors:  Diane Kennedy, OP, Ann Willits, OP. Honora Werner, OP, Mary Ellen Green, OP and Connie Schoen, OP. We thanked for them for their tremendous contribution to the Dominican family in the United States. 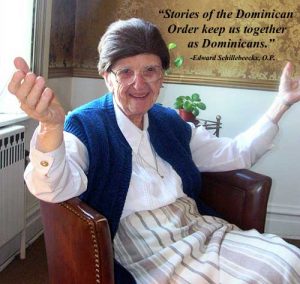 Soon you will read a published account of the story of Parable. Telling such a story needs documents carefully maintenance and accessible for a researchers. The next article in the McGreal 10th Anniversary series will tell you about the Parable Collection and other interesting archives the McGreal Center holds. TBC!

« Dominican Women Afire will be preaching during the Easter Season! » UN Update: CSocD56 from the Civil Society Perspective