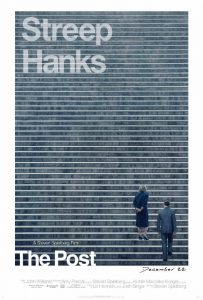 The Post is the new newspaper drama directed by Steven Spielberg. It takes place in 1971, when Richard Nixon was President and the U.S. was involved in the increasingly unpopular Vietnam War.

At this time, journalist Daniel Ellsberg came across a series of classified documents on America’s involvement in Vietnam, going back all the way to the Truman Administration. These documents, which became known as the “Pentagon Papers,” showed that the government had lied to the American people over the years about Vietnam. Noting their significance, Ellsberg smuggled these top secret documents from the Pentagon and offered them to the Washington Post. Owner/publisher Katherine Graham (Meryl Streep) and editor Ben Bradlee (Tom Hanks) face a dilemma. They know the significance of the Papers. But they also know that if they attempt to publish any part of them, they will be sued by the White House, and could face financial ruin, and even jail time.

The drama focuses on the dilemma faced by Bradlee, and particularly Graham. The Post was owned by the family of Graham’s husband. Upon his death, Katherine inherited the paper. At the time, Katherine was a solitary woman in the newspaper business. She had to decide whether to risk her family fortune and the newspaper itself. Katherine was also friends with some of those implicated in the Pentagon Papers, especially former Secretary of State Robert McNamara. On the other hand, if the Post took the risk and published the Pentagon Papers, the newspaper’s reputation would be enhanced as a champion of free speech and the public’s need to know.

The movie does a very good job with Katherine’s dilemma. Meryl Streep continues to impress, giving another fine performance as Katherine. Katherine seeks counsel from her many advisors and stakeholders. Her attorneys and others encourage her not to take the risk. On the other side, Bradlee argues for her to publish the papers. Ultimately, it’s a decision only she can make.

In a way, The Post is a “prequel” to the classic 1970’s film All the President’s Men, which also tells the story of Graham, Bradlee, and the Post investigating Watergate, the story that would bring down Nixon. The Post also brings to mind the 2015 movie Spotlight involving the Boston Globe’s reporting of the Clergy Sex Abuse Crisis. One of the writers of The Post, Josh Singer, also co-wrote Spotlight.

On the whole, I didn’t find The Post quite as good as the other films. Certainly, the screenplay has to set the stage for the main conflict. But it takes too much time. In addition, the audience is introduced to too many characters (e.g. attorneys, journalists, Katherine’s social circle) to remember them all. I also felt like there were times that the movie comes across as “preachy” (in the bad sense of the word).

It goes without saying that Tom Hanks is one of the best actors of our time. But he wasn’t convincing as Ben Bradlee. Hanks seemed to be channeling the Oscar winning performance of Jason Robards as Bradlee in All the President’s Men, complete with his Boston accent. I also didn’t think there was great chemistry between Streep and Hanks in what is amazingly their first film together.

I can understand that Spielberg, Streep, and Hanks were attracted to this story championing freedom of the press. The movie is also timely in telling the story of Graham, a woman who has to stand her ground in a male-dominated world. So there are good reasons to see The Post. Yet I have to say that I admired it more than I actually liked it.

« Photo of the Week: Dominican Sister of Springfield Kathlyn Mulcahy Heads to Honduras » Dominican Institute for the Arts Winter 2018 Newsletter