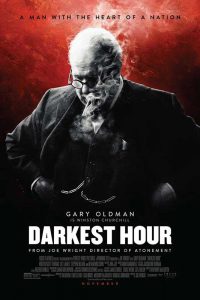 Last summer the critically acclaimed movie Dunkirk was released, telling the story of the evacuation of the British troops from Dunkirk to England in 1940. Now we see the story leading up to Dunkirk, from the point of view of Winston Churchill in the new movie Darkest Hour.

Darkest Hour takes place in the month of May, 1940, when Neville Chamberlain resigns as British Prime Minister and Churchill takes office. It’s interesting that, with his great reputation after the war, we learn that Churchill was disliked by many when he took office, including King George VI (Ben Mendelsohn). Churchill was a compromise candidate, a conservative who was also acceptable to the liberal party. On the continent of Europe, Hitler’s troops were destroying the Belgian, Dutch and French forces. If they destroyed the British forces at Dunkirk, Britain would be left virtually defenseless. In addition to the War in Europe, Churchill had his own political battles to fight at home.

Much of the film is told from the perspective of Elizabeth Layton (Lily James), a young woman who is hired to be Churchill’s secretary. Elizabeth learns about the intricacies of war and politics, not to mention the complex and demanding man she works for. But Churchill learns to respect Elizabeth, and even to consult her at times.

Director Joe Wright (Atonement) certainly gives Darkest Hour a dark look:  he chooses muted colors, the sky is grey, and much of the movie takes place in rooms without windows. The darkness reflects the somber mood of the country at such a critical moment in its history. Anthony McCarten’s screenplay is heavy on dialogue, mixing Churchill’s actual words with debates in Parliament, and deliberations with the war cabinet. If the movie is historically accurate, there was serious consideration of Great Britain entering into peace talks with Germany at this time, faced with the very real possibility of an attempt of a Nazi invasion of Britain. Churchill calls President Roosevelt to request his help. FDR tells him that, due to the Neutrality Act, his hands are tied, and he is not able to assist. The British are on their own.

Gary Oldman gives a great performance as Churchill, and his performance is widely considered to win many awards this year. He is able to disappear behind the makeup and truly become one of the most important figures of the Twentieth Century. When he speaks, Oldman pulls on his lapels, then stands with his hands on his hips, and you forget that this is an actor. Churchill can be gruff, of course, famously puffing away at his cigar. But he’s also thoughtful, and in a great scene, talks to the people of London on a subway to get their thoughts about the War. I don’t know if the scene is historically accurate, but it’s a marvelous moment, with the people showing their regard for Churchill, and the Prime Minister really listening to the voice of the people. It’s after this scene that Churchill goes to Parliament, declaring that England will never surrender!

In one scene near the end of the movie, Churchill’s wife Clemmie (Kristin Scott Thomas) tells Winston that “he has the weight of the world on his shoulders.” Indeed he did. Darkest Hour is a very well done, absorbing film about courageous leadership in one of the darkest moments in British history.

« Photo of the Week – Our Common Dominican Journey: Ever Ancient, Ever New » Faith and Film: The Shape of Water