Faith and Film: The Beguiled 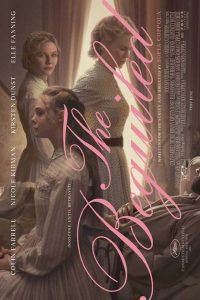 The Beguiled, a new film directed by Sofia Coppola, is set in 1864 Virginia. While the Civil War rages on, with cannons booming in the distance, an oddly protected life goes on behind the gates of Miss Farnsworth’s Seminary for Girls. Only four students remain at the school run by Martha Farnsworth (Nicole Kidman), with assistance from tutor Edwina (Kirsten Dunst) and teenaged helper Alicia (Elle Fanning). While war goes on around them, Martha schools the girls in everything from French to literature to music to gardening. It’s nice to hear psalms and hymns recited and chanted!

One day the calm inside the gates is shattered by the appearance of a wounded Union soldier, John McBurney (Colin Farrell). Martha brings in the ruggedly handsome soldier and demonstrates her nursing skills by cleaning and dressing his wounds. The women and girls learn that John is a native Irishman who was paid to fight for the Union. Cautious and frightened at first, the residents of the school begin to warm up to John, and he to them. Gradually they invite him to dine with them, and he reciprocates by tending to their neglected garden.

As you might expect in this setting, sexual tensions begin to arise between the women and handsome visitor. Eventually the tensions explode in dramatic fashion. I can’t reveal any more of the plot without giving away too many spoilers!

I liked The Beguiled for many reasons. First of all, it is a stunningly beautiful film. Handsome period costumes and a stately antebellum home are well used. Every scene is carefully composed and photographed. The daytime scenes show rays of sunlight filtering among the Spanish moss hanging from the majestic trees. The evening scenes are filmed by candlelight, with shadows all around. There is beauty, but also a hint of mystery and suspense from the beginning which slowly builds to its climax.

The Beguiled is sparse in dialogue. Juxtaposed are scenes of innocence, with the young girls playing, along with furtive glances among the adults. Kidman is great as the proper Martha, teaching and protecting the girls, and deciding the fate of their visitor. Dunst and Fanning vie for the eye of their visitor, well played by Farrell. The innocence is eventually shattered in the gripping final section of the movie that I doubt you’ll soon forget.

I also like the fact that the film is only 93 minutes. Without wasting time, the pacing is just right; it doesn’t seem rushed.

The film is based on a novel of the same name, which was made into a 1971 movie with Clint Eastwood and Geraldine Page, which I haven’t seen. Now I’m interested to go back to see how closely this version follows the original.

A caution that there are a couple of non-graphic sexual scenes. There is also a fair amount of blood from the medical scenes. Coppola uses discretion in that most of the medical intervention is off-camera.

I recommend The Beguiled for its visual beauty, strong performances, and absorbing plot that will keep you intrigued even after you’ve left the theater.