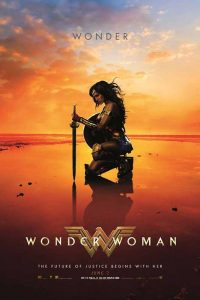 If you’re like me, Wonder Woman immediately brings to mind the campy 1970’s TV show starring Lynda Carter. The movie is very different in tone from the TV show. Surprisingly, much of the movie is an espionage/adventure/romance movie with heroes Diana (Wonder Woman), played by Israeli actress Gal Gadot, and dashing American pilot Steve Trevor (Chris Pine). Diana and Steve, with the help of a small group of other spies, go behind German lines during World War I in order to end the war. This part of the movie is absorbing, enhanced by great sets and photography.

But I’m ahead of myself. The movie opens with an extended sequence on an isolated island inhabited entirely by Amazon warrior women. Young Diana wants to train with the warriors, but her Mother is reluctant to allow her. As you can guess, Diana is allowed to train, under the caring, but challenging eye of her aunt. The isolation comes to an abrupt halt when Diana witnesses an airplane crash landing into the sea. She rescues Steve, the pilot, who is followed by German soldiers in pursuit. The Amazons defeat the Germans. Diana nurses Steve back to health. As she does so, Steve tells Diana about the Great War, of which she knows nothing. Diana insists on returning to Europe with Steve to defeat Aires, the god of war, who she believes is the driving force behind all the destruction and suffering.

Steve and Diana sail to England. In an amusing sequence, Steve and his assistant take Diana to a store to purchase less conspicuous clothing than her Amazon attire. Against the wishes of his superiors, Steve takes a small group of mates across the Channel to the Front. Steve is searching for a German general and his accomplice, a scientist, who has developed a particularly destructive gas with which they can win the war.

Diana learns about her superhuman powers, especially in the climactic battle sequence against a surprise villain. Despite the action, suspense and special effects, the sequence goes on too long.  At 2 hours, 20 minutes, the movie is about 15 minutes too long.

Yes, Diana does discover her superhuman powers as she goes about saving the world as Wonder Woman. As happens in most of superhero movies, there’s lots of talk about mythological origins of the characters. But the heart of the movie is about the relationship between Diana and Steve, and their desire to end the war and suffering. While navigating their way through war-torn Europe, we see frequent scenes of wounded soldiers, and suffering women and children. Diana is appalled to see the horrors of war.

Much has been made of the fact that this is the first comic book movie with a woman as the title character. Also, it’s the first movie of this genre to be directed by a woman, Patty Jenkins. While there’s still a lot of comic book violence, there’s much less gore than other movies of this type, and more attention to character. The attention to the suffering is evidence that Wonder Woman has more heart than most summer action movies.

I was unfamiliar with the work of Gal Gadot before, but she gives a terrific performance as Diana/Wonder Woman. I think we’ll be seeing a lot more of her in Wonder Woman sequels, and, hopefully in other roles as well.