Faith and Film: Guardians of the Galaxy Vol. 2 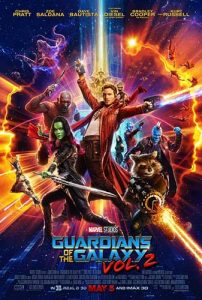 One of the breakout hits of the summer of 2014 was Guardians of the Galaxy. It was a comic book superhero movie, but with a big difference.  While most of those movies are very dark and serious, all about saving humanity, Guardians was goofy, funny, and didn’t take itself seriously. In addition, it had a fun 80’s soundtrack, including “Hooked on a Feeling,” which was heard frequently throughout the movie. Guardians was hardly a great movie, but at least for the first half, it was unexpectedly entertaining.

A sequel was inevitable, and Guardians of the Galaxy, Vol. 2, is now playing in theaters. Chris Pratt returns as the hero Peter Quill, with his fellow Guardians, all misfits:  Gamora, Drax, Groot (now Baby Groot), and Rocket. In the sequel, Peter meets his father, a god (?) named Ego (Kurt Russell). Ego takes Peter to his distant planet where he instructs Peter. Peter loves getting to know the father he never had, until he inevitably finds out that Dad is, appropriately, pure Ego.

Unfortunately, writer director James Gunn seemed to forget that what made the first Galaxy good was that it didn’t take itself so seriously. Vol. 2 takes itself way too seriously. There are a few funny throw away lines, especially one involving Mary Poppins. But for the most part it fails to entertain. Even its 80’s soundtrack is not as memorable. I missed “Hooked on a Feeling!”

The ending does tug at the heart strings a bit when the misfits all discover something about the true meaning of family. Naturally, it’s not a false god with a huge Ego who deserts his wife and child. But I think we all knew that.

Because Guardians Vol. 2 is making a lot of money at the beginning of this summer movie season, I’m sure there will be a Vol. 3. I just hope the inevitable sequel to the sequel doesn’t forget not to take itself so seriously. And to get a better 80’s sound track.