Faith and Film: Beauty and the Beast 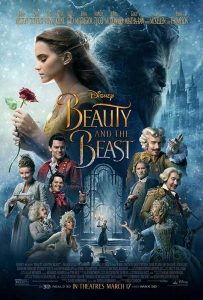 It’s hard to believe that the classic Disney animated film Beauty and the Beast is 25 years old.  Released in 1991, it became a beloved classic and the first animated movie to be nominated for a Best Picture Oscar. I saw the movie and loved it, as did many others. The timeless story, innovative computer generated animation, and of course, wonderful score won over a generation.

I was happy to hear that Beauty and the Beast was being remade as a live action film. Apparently so were many others as demonstrated by its record breaking opening weekend. I enjoyed the new version, but was not as taken by it as the animated version. The main reservation made seem odd, but it all just seemed to be overdone. Everything about it is too much, especially the sets and costumes. Early in the movie, where we’re introduced to the main character, Belle, with the catchy song, Belle is walking through her tiny provincial village. With so many people in period costumes, the town seemed more like Paris than the quaint backward town it’s supposed to be. It doesn’t let up throughout the movie; the sets and costumes get grander and grander and almost take over the movie.

Don’t get me wrong. The “tale as old as time” still has its charm. When Belle and the Beast have their big dance to the title song, it’s a lovely moment. Emma Watson, best known as Hermione in the Harry Potter movies, makes a lovely, fierce Belle, although her singing voice could be better. Watson, like Hermione, is strong enough to stand up to a beast to protect her father. Dan Stevens does well as the Beast, and shows a nice singing voice in the new song, “Evermore.” The stand out among the large supporting cast is Kevin Kline, as Maurice, Belle’s widowed father. Kline fleshes out the absent minded professor, as a man who loves his daughter and continues to mourn the loss of his long-deceased wife. Luke Evans swaggers as the narcissistic Gaston. But the rest of the cast is swallowed up by the production and special effects.

I suspect that this version of Beauty and the Beast will appeal mainly to younger children or those few who have not seen the 1991 animated version. Or, for a rare treat, search out the classic 1946 French movie with its stunning black and white photography. It’s a tribute to the power of the tale that every generation has its Beauty and the Beast.