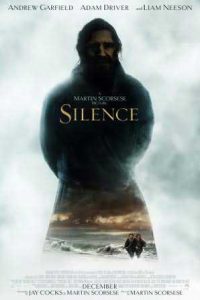 Silence is the new film from acclaimed director Martin Scorsese. The film has been much anticipated in Catholic circles, since it tells the story of Jesuit missionaries in 17th Century Japan. Silence is adapted from the novel by Shusaku Endo and adapted for the screen by Scorsese and Jay Cocks. Scorsese has wanted to bring this story to the screen for many years. It has finally been released, and is well worth the wait.

At almost 2 ½ hours, Silence is not an easy film to watch. It takes its time telling the story of Portuguese Jesuits Rodrigues (Andrew Garfield) and Garupe (Adam Driver) who are smuggled into Japan to find their mentor, Fr. Ferreira (Liam Neeson), who has not been heard from in years. Ferreira’s superiors suspect that he has renounced his Christian faith, under torture, but no one knows for sure. The film has long periods of silence, and much dialogue in Japanese, with subtitles. There are scenes of torture and violence, but, with one exception, not as graphic as I had feared. Despite the length, I was always absorbed by the movie.

When Rodrigues and Garupe arrive in Japan, a small group of Christians finds them and hide them. The community tells them that all the missionary priests before them have been killed by the Japanese. They are very grateful to have the two priests among them to celebrate the Eucharist, hear their confessions, and baptize their children. I found these scenes very moving.

The Japanese Christians are well aware of the threat of danger the Jesuits face if they are discovered. The lay Christians themselves are forced to step on images of Christ (or in some cases, spit on them) to demonstrate their renunciation of Christianity. Rewards are offered in the towns to anyone who turns a Christian in to the Inquisitor. Christians who refuse to renounce their faith are arrested and tortured. Some are even killed by crucifixion, burning, or drowning.

Rodrigues and Garupe are eventually captured, arrested and questioned repeatedly by the Inquisitor. The dilemma they must face is whether to renounce their faith in order to save others from torture and even death. Both struggle mightily with this dilemma.

The Japanese eventually bring Ferreira to talk to Rodrigues. (Spoiler alert!) Ferreira admits that he has renounced his faith under torture, and now lives as a Buddhist, refuting the Christian faith in writing. Rodrigues is shocked to hear this from the mouth of his mentor. Ferreira encourages Rodrigues to do the same. Isn’t that what Jesus would want? Certainly he did not wish for human beings to suffer? Does God answer our prayers, praying for strength and courage? Or does God remain silent in the face of suffering?

Undoubtedly, these are difficult questions that theologians have wrestled with for centuries. I wondered what I would do if I was faced with these questions. Like the great missionaries, would I be able to evangelize in places hostile to the faith? Would I renounce my faith under torture? Is my faith strong enough to face persecution?

I’m glad that Scorsese was finally able to bring Silence to the screen. Visually it’s a beautiful movie, with stunning photography, sets and costumes to transport the viewer to 17th Century Japan. It’s a haunting story of faith, struggle, and courage under persecution centuries ago, which still seems pertinent to us today.

« Photo of the Week: Dominican Women and Men Gather for the Closing Celebration of 800th Anniversary of the Order » Dominican Young Adults USA: ‘International Congress for the Mission of the Dominican Order’