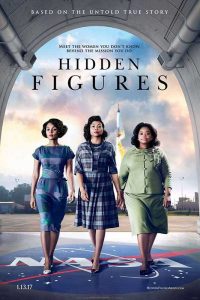 Hidden Figures tells the true story of African American women who worked in the early years of NASA. They played a significant part in the launching of the first rockets and the orbit of John Glenn in 1962. Yet, until recently, their contributions were largely unacknowledged.

The movie focuses on three of these women:  Katherine G. Johnson (Taraji P. Henson), Dorothy Vaughan (Octavia Spencer) and Mary Jackson (Janelle Monáe). The three women worked among a group of African American women known as “computers” for their proficiency with numbers. Because of their race and gender, they worked in a small segregated office, little known among most of the other workers at NASA. With her brilliant mathematical ability, Katherine was brought in to work in an office in which she was the only African-American and one of only two women. She had to prove her abilities over and over again to her supervisor, Al Harrison (Kevin Costner) and White male co-workers in white shirts. Interestingly enough, the young John Glenn was one of the first to recognize Katherine’s contributions and insist that she check the math on his mission before launch.

Dorothy was the supervisor of the human computers, even though she was denied the title or salary of supervisor. Eventually she learned to operate actual (non-human) computers and taught her workers to do the same. Dorothy became the supervisor of the computer room, back in the days when computers were huge machines that filled up an entire room. Mary became the first African American woman to earn an engineering degree in 1960’s Virginia.

The title of the film refers not only to the numerous calculations made by the NASA mathematicians, but also the “invisible” contributions in this area made by African American women. When Harrison asked Katherine where she was going when she left the office for long periods of time during the day, she told him that she had to leave her building, and walk outside for a half mile to reach the “Colored” rest room. Harrison and the other men were amazed to hear this. Before then, they had never paid attention to the location of “Colored” rest rooms. To his credit, Harrison integrates the rest rooms the next day and becomes an advocate for Katherine.

Hidden Figures is a solid, straightforward film directed by Theodore Melfi. The screenplay, written by Allison Schroeder and Melfi, balances scenes of the women’s home life along with their work at NASA. It’s also commendable for a nice blend of humor along with the drama. This is an important story, well told with a fine cast. As I write this review on Martin Luther King Weekend, the film is a reminder of the contributions by African Americans in our history which have so often gone untold. Hidden Figures also made me reflect on those who are making unacknowledged contributions to our society today.

Hidden Figures is becoming a surprise crowd-pleasing hit at the box office. I saw the film on a Sunday afternoon in a crowded theater. At the end of the movie, the audience burst into spontaneous applause, which I was pleased to join in.

The relatively mild “PG” rating indicates that Hidden Figures lacks the profanity, violence, or sexual situations. So it’s good for all ages. Any objectionable scenes that I remember are scenes of the prejudice and racism that African Americans endured. For example, a public librarian tells Dorothy that she can only check out books from the library’s small “Colored” section. I hope we still find such practices objectionable.