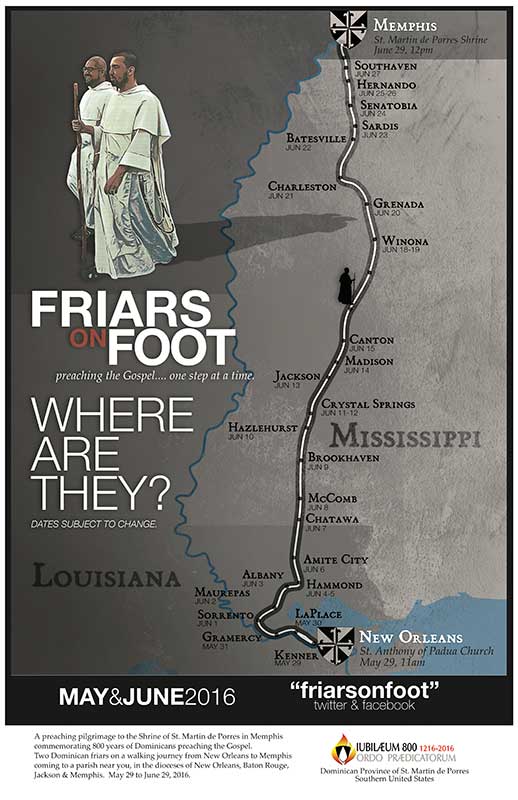 NEW ORLEANS, LA — Beginning May 29, 2016, two Dominican priests will walk over 450 miles from St. Anthony of Padua Church in New Orleans to the National Shrine of St. Martin de Porres in Memphis, Tennessee. Fr. Thomas Schaefgen, OP, and Fr. Francis Orozco, OP, are celebrating the 800th anniversary of the approval of the Order of Preachers, also called Dominicans after the founder, St. Dominic de Guzman, by reaching back to the roots of the friars preachers. The Order of Preachers (Dominicans) is a Roman Catholic religious order made up of priests and brothers that was formally approved by Pope Honorius III in 1216 with the mission of “preaching and the salvation of souls.” St. Dominic followed the example of Jesus who moved about preaching the Good News from town to town, rarely staying in one place, and having no place to lay his head. The route that Fr. Thomas and Fr. Francis will travel begins in New Orleans, takes them around Lake Pontchartrain, and then they will head North through Mississippi, ending in Memphis, TN. The pilgrimage will begin on May 29, 2016, and end on June 29, 2016.

The new evangelization and ecumenism are at the heart of “Friars on Foot.” The friars write on their pilgrimage website, friarsonfoot.wordpress.com:

“We will encounter people of good will from many denominations and faith traditions, some who will be glad to see us, most will be curious, some will want to join us, and many will have questions. Direct and personal encounters with the people we meet on the way show an Order and Church that is not afraid to go outside of its doors. Our mission is simple yet far- reaching.”

Fr. Thomas Schaefgen, OP, is the Chaplain and Director of the Catholic Student Center a 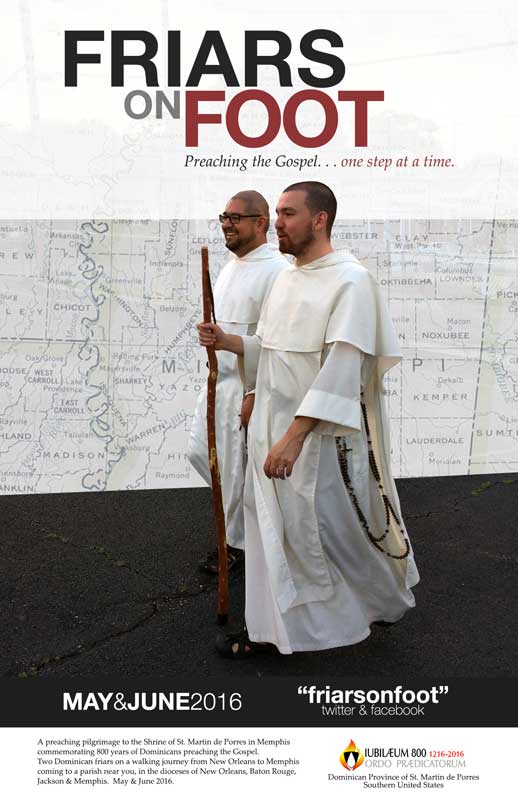 t Tulane University in New Orleans, Louisiana. Fr. Francis Orozco, OP, is the Chaplain to the Catholic Student Center at Texas Tech University and the Associate Pastor of St. Elizabeth University Parish in Lubbock, Texas. The friars will stay overnight at churches along their route and encourage people to join them whether it be for a few hours or an entire day. People who meet them are encouraged to post about it on social media, especially Facebook and Twitter with the hashtag #friarsonfoot. More details including a complete itinerary, map, social media information, and downloadable posters can be found at the Friars on Foot website at friarsonfoot.wordpress.com.

About the Dominican Friars — The Province of St. Martin de Porres serves Jesus Christ in response to his commissioning to go out to all the world and spread the Good News. The friars (priests and brothers) spread the Good News through preaching, teaching, educating, and evangelizing that arises out of Dominican common life. This mission is carried out in universities and other educational institutions, campus ministries, Dominican parishes, and itinerant ministries. The Province of St. Martin de Porres carries out its mission with a primary focus on the under-evangelized in the Southern United States. Visit www.opsouth.org to learn more.

Full details can be found on the Friars on Foot website.

« ‘Keeping Faith with the Preachers’ – New Book about the History of Dominican Sisters » UN Briefing – ‘Permanent Forum on Indigenous Issues Meets from May 9-20; Indigenous Peoples: Conflict, Peace and Resolution’