Faith and Film: The Big Short 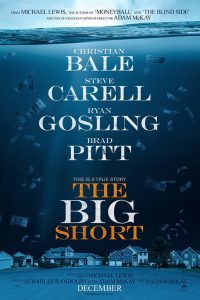 How much do you know about the mortgage bond crisis of 2007, leading to the steepest downturn in the economy since the Great Depression? If you are like me, you do not know much about it. I have degrees in psychology and theology, not economics. If you want to learn more about mortgage bonds and the stock market collapse, and be entertained at the same time, I recommend that you see the new movie The Big Short. It is a rather complex movie, weaving together parallel stories of “outsiders” who predicted the collapse, and amazingly tried to profit from it. So I found myself rooting for them, but, simultaneously, feeling rather sick about it. If they are right, then a lot of people will suffer.

The great cast includes Christian Bale, Ryan Gosling, Steve Carrell, and Brad Pitt, as very different men who understand the world of high finance, and saw the collapse coming. Gosling serves as a narrator of sorts who will often address the audience directly with commentary on the action. Bale, in another of his great performances, is the most colorful of the four, a former physician and non-conformist genius who is basically left alone in his office wearing shorts, T-shirts and sneakers while outthinking all the guys in expensive suits. Carrell is the angry, super-competitive man who is grieving the death of his brother. Pitt has basically given up on Wall Street, living in Colorado, until he becomes a mentor to two of his former students. In their own way, they are all prophets, seeing the impending doom that no one on the inside wants to acknowledge.

Adam McKay, director and co-author (with Charles Randolph) of The Big Short manages to keep the movie both informative and entertaining at the same time. I learned a lot watching this film. It could easily have become bogged down with long speeches about the economy, being smart yet putting its audience to sleep. McKay keeps things moving, however, with the stories of the main characters, along with many peripheral ones as well. There is also a surprising amount of humor in what could have easily been a dull lecture of a movie.

Three decades ago, Michael Douglas famously proclaimed “Greed is good” in Wall Street. Many of the players in The Big Short still proclaim the Gospel of Greed, profiting off mortgages that people could never have afforded, then bundled, packaged and sold, looking like “sure bets.” It is disturbing when you hear that no one from the big Wall Street firms went to jail, while millions lost their homes and jobs during the economic downturn of a few years ago. The characters also state that many put the blame for the crisis on the poor and the immigrants for the crisis, rather than those who took advantage of those who just wanted to own their own home.

There is a good bit of profanity in The Big Short, but overall it is quite entertaining, educational and thought provoking. I expect that it will get a few Oscar nominations soon, including for its screenplay and Christian Bale’s performance. I did not understand the whole movie; there is a lot to take in! But look forward to enjoying it again and learning a little more economics too. If the writers are correct, we may be headed down the same path again in a few years.