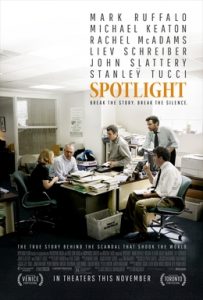 For many of us, Spotlight will be a hard movie to watch. While I admit that I did squirm through parts of Spotlight, I thought, on the whole, it was a balanced approach to a difficult subject. Spotlight tells the story of the Boston Globe’s investigation into the sexual abuse scandal in the Archdiocese of Boston. A series of articles was published in 2002 in the Globe which led to the resignation of Cardinal Law, and an overhaul of the way the church treats the issue. Spotlight shows how much has changed in the last 13 years, and is a thoughtful look at what we did wrong. More than anything else, it emphasizes the need for all of us, whether we are bishops (or even provincials), clergy, parishioners, lawyers, reporters, parents, and others, to be vigilant for the protection of children. My favorite line in the movie comes from Mitchell Garabedian, attorney for several victims, who says:  “If it takes a village to raise them [children], it takes a village to abuse them.”

Spotlight is the name of a team of four investigative reporters at the Globe who work together on special projects. Walter “Robby” Robinson (Michael Keaton) heads the team, which consists of Mike Rezendes (Mark Ruffalo), Sacha Pfeiffer (Rachel McAdams) and Matt Carroll (Brian d’Arcy James). When the Globe’s new editor, Marty Baron, arrives from Miami, he gives a green light to the Spotlight team to investigate the abuse crisis.  Spotlight pays homage to the classic 1976 film, All the President’s Men, which chronicled the investigation of the Washington Post into the Watergate scandal. The Spotlight team works hard, following up on leads, doing its own research, interviewing lawyers and victims, uncovering more than they ever expected.

Many interesting points are made. The investigation was begun under Baron, who came from outside Boston, and was also Jewish. Baron tells Cardinal Law that he believes in an independent press. If the media is tied too closely to the Church (or any other institution), can it properly be a watchdog for them? The Globe itself does not escape criticism. Through their own research, the Spotlight team realizes that they had the evidence to investigate the allegations years earlier. Instead, it did nothing.

A related point is the need for newspapers to devote their personnel and resources to investigative reporting. Many newspapers have folded in the last decade, while still others are mere shadows of themselves. An individual can find “headline” news anywhere, but fewer sources report the news in depth. Spotlight is a reminder that in-depth, investigative news is still necessary in our time.

Several times Robinson and the others mention that they are not out to get Law, but they are after a system that protected pedophile priests. The system has undergone many changes in the last decade. For example, the Conference of Major Superiors of Men (CMSM), to which the majority of the men’s religious orders in the U.S. belong [including the Dominicans], contracts with an independent agency named Praesidium, to monitor our procedures to protect children. Improved screening of candidates; advisory boards, which include lay men and women, background checks and ongoing education for all who have access to children, have resulted from the investigation. We’ve learned the hard way, and are deeply sorry for the abuse that occurred. We pledge to do everything we can to see that it does not happen again.

Spotlight does not sensationalize the topic of child abuse nor delight in making the Church look bad. Tom McCarthy, director and co-writer, with Josh Singer, keeps the action moving briskly. This kind of movie could easily become bogged down with endless details, including scenes of reporters typing away on computers, interviews with countless victims, and endless editorial meetings. However, thanks to good writing and editing, I never became lost. Spotlight documents the toll the investigation takes on the members of the team, along with those who assist them in their work.

The actors work very well together as an ensemble. This is not the kind of movie in which any one performance stands out. Just as the reporters work together as a team, so does the large cast of actors in the service of the story.

Spotlight has received critical acclaim and is frequently mentioned as a contender for many awards this season. Despite its difficult subject matter, Spotlight is a well made, engrossing movie that engaged my head and my heart. It reminds me that the church has come a long way in its protection of children. But we can never rest until every child is safe.