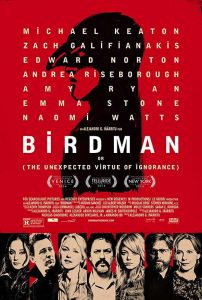 “Birdman” is a wildly inventive film by Mexican director Alejandro Gonzalez Inarritu, best know for his 2006 film “Babel.” In “Birdman,” a washed-up actor named Riggan Thomas tries for a comeback as the director and star of a Broadway play with the pretentious title “What We Talk About When We Talk About Love.” Riggan is best known for playing a superhero named Birdman 25 years ago. The three “Birdman” films were huge hits. Riggan turned down the fourth in the series, and has since fallen off the radar screen. If anyone remembers him, it’s as Birdman.

The fact that “Birdman” seems so real is largely due to the casting of Michael Keaton as Riggan. Michael Keaton himself was a big star 25 years ago, and played the title character in the first two “Batman” movies in 1989 and 1992. Since then, his star has fallen. I don’t know if “Birdman” was written with Keaton in mind, but it certainly works! Keaton gets inside the skin of Riggan so well because of his own identification with the role. Birdman is his comeback role, and Keaton looks like a sure bet to receive his first Oscar nomination.

Inarritu certainly tries to get the viewer inside Riggan’s head too. The hand-held camera follows Riggan so closely that I was concerned it would run into him. Riggan goes on rants about his self-doubt and failure alone in his dressing room, as well as with the actors in the play and his daughter Sam (Emma Stone) whom he hires to be his assistant. Riggan also engages in an ongoing conversation with Birdman himself, who is always lurking nearby. Inarritu along with Nicolas Giacobone wrote the dialogue. Sometimes it seems over-the-top, and profane, but is generally insightful and witty.

Most of the film takes place in the Broadway theater during the previews for “What We Talk About.” Riggan clashes with his actors, primarily Mike Shiner (Edward Norton), an acclaimed, although difficult, actor brought in during previews. Riggan also encounters Tabbitha, the powerful New York Times theater critic, who lets Riggan know that she plans to write a scathing review of the play even before she sees it. Talk about pressure! “Birdman” captures all the emotions of preparing for a Broadway opening: the excitement, the pressure, tension, and sense of risk. Anything could go wrong, and a lot does. Riggan knows that Tabbitha really has the power to make or break his play. Riggan knows very well that his career rides on the success or failure of the play.

“Birdman” deals with many themes, from the meaning of fame and celebrity, to family dynamics, to self-doubt and second chances, in the high-pressure world of show business, along with the contemporary social media scene. Sam creates Facebook and Twitter accounts for her dad, when she learns, to her disbelief, that he does not have them. The movie also pulsates with energy, thanks in large part to a wonderful percussion jazz score by Antonio Sanchez. Yes, the movie does seem overly talky at times, as though the screenwriters couldn’t get enough of hearing their characters shout out their words!

As award season nears, I imagine that “Birdman” will receive several nominations, including best picture, actor, director, screenplay, and score. Norton may also earn a nomination for his performance as a petulant actor, along with Stone, as a fragile young woman just out of rehab, longing for her father’s love.

Despite some excess from time to time, “Birdman” is an exciting, original film that demonstrates that even a washed-up actor can still make friends with his old self, while taking new risks. Like Birdman, he can even fly!