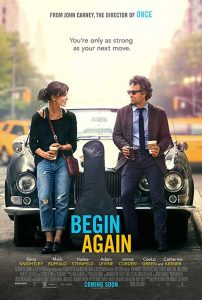 Summer is the time for big blockbusters. Yet every summer in recent memory has brought a memorable independent movie made for a fraction of the blockbusters. This summer, we are fortunate to have “Begin Again.”

“Begin Again” is written and directed by John Carney, who gave us the wonderful independent movie “Once” in the Summer of 2007. That story of street musicians in Dublin went on to become an Oscar-winning film, and now a Tony-winning Broadway musical. “Begin Again” is also a story of musicians, with long sequences devoted to recording music. Also, like “Once,” “Begin Again” features interesting characters that you will come to care about.

“Begin Again” takes place in New York, rather than Dublin. Dan (Mark Ruffalo) is a music industry executive whose life is in shambles. Dan is estranged from his wife, Miriam, and teenage daughter, Violet. Changes in the music business, along with his inability to find new talent have all taken their toll on Dan. Even though he still drives a Jaguar, Dan is living in a small, seedy apartment building, apparently broke.

One night, Dan wanders into a bar in Greenwich Village where a young woman named Gretta (Keira Knightley) is coaxed onstage by her friend Steve. Unprepared, Gretta sings and plays guitar. In a wonderful scene, Dan watches Gretta play and sing alone, then imagines a fuller sound accompanied by different instruments and backup singers. In one moment the audience understands Dan’s talent. Not only can he spot talent, he has the ear of a producer and arranger.

Dan does not know that Gretta is playing the night after leaving her musician boyfriend, Dave (nicely played by “The Voice’s” Adam Levine). They recently flew over from England, where Dave is being recruited by the music industry. Even though they wrote music together, the record company is only interested in Dave. Soon Dave falls for a woman at the record company, leaving Gretta on her own. Dave flies to Los Angeles as Gretta moves out with nowhere to go. Gretta finds her old friend, Steve, playing music on the streets and in clubs. She is able to stay with Steve temporarily.

Dan is very interested in Gretta, and thinks he can make her a recording star. Gretta is reluctant, not quite sure about Dan’s ability to produce, and still hurting over the breakup with Dave. Yet she is intrigued by Dan’s idea of recording an album in various locations on the streets of New York, and agrees to work with him. Dan and Gretta become kindred souls, both down on their luck and hurting from their broken relationships. Through their love for music and friendship, Dan and Gretta start to put the pieces of their lives together again.

“Begin Again” has an excellent cast, full of excellent actors who are as comfortable in mainstream movies as in independent films (including Catherine Keener as Miriam and Hailee Steinnfeld as Violet). It’s also fun watching musicians like Lambert and Celo Green add an air of authenticity to the music theme. Like “Once,” “Begin Again” is not a musical in a traditional sense, although music is an integral part of the story. Both films celebrate the creative talents of musicians who express themselves in music.

Carney has written and directed a movie with characters who grow on you, lots of charm, good music, and an ending that seems just right. “Begin Again” is a gem of a movie. Maybe it will also become a hit Broadway musical in a few years?

« Drawing mandalas with Brother Mickey Aug. 15–17 » Faith & Film: Dawn of the Planet of the Apes