November 4, 2019, Adrian, Michigan – While the United States is known as a nation of immigrants, recent federal policies have made it much more difficult for today’s immigrants to obtain permanent resident status, for people from Central America to be granted asylum, and for “Dreamers” who may have only known life in the United States to be safe from deportation.

END_OF_DOCUMENT_TOKEN_TO_BE_REPLACED 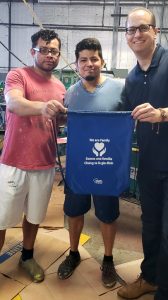 On August 16th to 18th, Fr. Brendan Curran, Alma Silva and Samuel Villanueva drove to Mississippi to provide support and gather information on the current situation after the detention of 681 workers in seven poultry plants.

Community immediately sprung to action.  Scorpion Graphics volunteered to print 300 backpacks for children of families with the symbol, “Somos Familia/ We are One Family.”
END_OF_DOCUMENT_TOKEN_TO_BE_REPLACED

Photo of the Week: ‘Rise for Refuge with Dominican Sisters~Grand Rapids’ 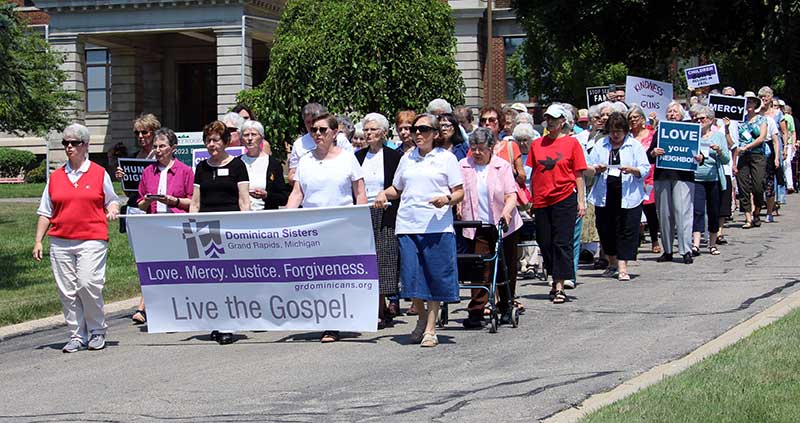 On Saturday, August 3, 2019, Grand Rapids Dominican Sisters, Associates, and employees gathered “to stand strong against illegal and immoral refugee and asylum bans in the United States . . . Together with Rise for Refuge and We Are ALL America, we are calling Members of Congress to do everything in their power to end the administration’s attacks on asylum seekers and return refugee resettlement to historic norms.” Read article

The North American Dominican Justice promoters gathered for their annual planning meeting in Techny, Illinois May 28-29. Twenty-four promoters, including sisters, friars, and laity from the U.S. and Canada, came together to strengthen their solidarity in the work. This year’s meeting focused on integral ecology as a framework in promoting justice, and updating the Call to Justice, the common document of principles and priorities for the Dominican Family in the struggle for justice and peace in North America.
END_OF_DOCUMENT_TOKEN_TO_BE_REPLACED