The Dominican Sisters of Peace welcomed ministry leaders from 13 sponsored ministries in 7 states for their annual Ministry Leader Gathering, held at the Martin de Porres Center in Columbus, OH, on February 19-20.

Ministries represented at this gathering included ecology centers, retreat centers, and learning centers. The theme of the meeting was “Carrying the Charism into Tomorrow” and explored issues such as sustainability/capacity, mission advancement, and resources for sharing the Dominican Charism to advisory council/board members.

END_OF_DOCUMENT_TOKEN_TO_BE_REPLACED

Sister Reg McKillip was recently appointed DSI (Dominican Sisters International) North American Co-Promoter of Justice, Peace and Integrity of Creation by Sister Margaret Mayce, DSI International Coordinator. Sister Reg was elected to this position by the Leadership of the North American congregations and was recommended to Sister Margaret and the DSI Coordinating Council.

END_OF_DOCUMENT_TOKEN_TO_BE_REPLACED 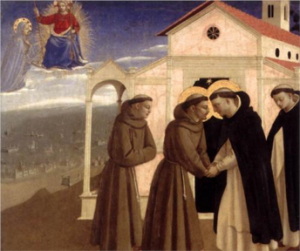 According to traditions held sacred by both the members of the Franciscan Order and the Dominican Order, Francesco Bernadone and Domingo de Guzman met during their lifetimes. According to Professor Plinio Corrêa de Oliveira, these are the details of that meeting:

In the summer of 1215 St. Francis had a vision of two men who would labor for the conversion of the world. Francis recognized himself as one of these apostles. He did not recognize the other one, however. 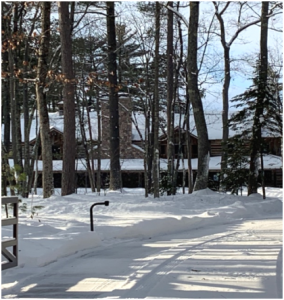 The following day, he was in one of the churches of Rome when suddenly an unknown person came up to him, embraced him, and said: “You are my companion, we will work together, supporting one another toward the same end and no one will prevail against us.” Francis recognized him as the other man in the vision. It was St. Dominic, who had also received a similar vision.

Together they worked to evangelize 13th Century Europe. Today their followers continue to preach the Good News of Christ.

END_OF_DOCUMENT_TOKEN_TO_BE_REPLACED

“At the Archdiocese of New York’s Annual Black History Month Mass, Sister Dorothy Hall, OP, of the Sisters of Saint Dominic of Blauvelt, New York, was honored as one of the inaugural recipients of the Bakhita Woman of Faith and Service Award.” Read article

“January 23, 2020, was a milestone for the Siena House community as they came together to celebrate their 30th Anniversary. Siena House, a ministry founded by the Sisters of Saint Dominic of Blauvelt, is a family shelter in the Bronx that provides transitional housing for pregnant women, as well as women with children under the age of three.” Read article