“The UN Commission for Social Development serves as a means to advise the Economic and Social Council on matters of social policy and development. The 56th Session of the Commission (CSocD56) was in session from January 29th through February 7th. The priority theme of this year’s Policy Cycle was ‘strategies for eradicating poverty to achieve sustainable development for all.'” Read article by Dominican Volunteer Viviana Garcia-Blanco

The McGreal Center’s 10th anniversary evokes so many gratifying memories. This article recalls one of the decade’s most enjoyable experiences –the In Our Keeping Conferences. The year 1984 marked the first In Our Keeping Conference (IOK) held at Sinsinawa. A variety of motherhouses hosted subsequent gatherings:  Racine (1986 & 1988), Amityville (1991) Adrian (1994) Kentucky (1996). Columbus held the 2000 IOK, which appeared to be the last one. Yet with the establishment of the McGreal Center, this popular conference materialized again in 2008, 2010 and 2012. In those few years, the IOK Conference attracted Dominicans from all over the world – the Philippines, Norway, France, Argentina as well from 13 states.
END_OF_DOCUMENT_TOKEN_TO_BE_REPLACED

Dominican Women Afire will be preaching during the Easter Season!

Easter Sunday to Pentecost, Dominican Women Afire will offer a daily preaching and will deliver right to your inbox. Be inspired and challenged and connected to the Word alive in each of us! To receive the daily preaching, click here and complete the form.

New Priory Press: ‘Dominican Friars Invite You to Journey with Them This Lent’ 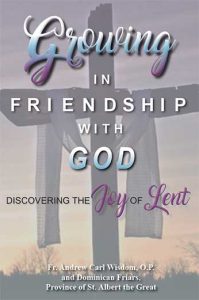 Chicago, IL, February 2, 2018 – The Dominican friars of the Central Province invite you to journey with them through Lent via their latest publication, GROWING IN FRIENDSHIP WITH GOD: DISCOVERING THE JOY OF LENT (New Priory Press, 2018).
END_OF_DOCUMENT_TOKEN_TO_BE_REPLACED

After the devastation of the Hurricane in Puerto Rico, Sister Marenid Fabre traveled there to see how our Sisters of St. Dominic of Amityville and the people of Puerto Rico were faring. She found that even now only fifty percent of Puerto Rico has restored electrical power. Towns in the center of the island and those in the path of the Hurricane were hit the hardest. There is a lot of devastation in the mountains. S. Marenid traveled with novice Sister Myriam Irizarry and saw that many people continue to be in need.
END_OF_DOCUMENT_TOKEN_TO_BE_REPLACED