In August several very large wooden boxes arrived at the St. Dominic Villa. They contained a virtual pipe organ from Martin Digital Organs in California as a gift from Father John Kellick.  Within days workers arrived and met with Sister Anna Marie Flusche to uncrate, set up and voice (sound adapt) it for our chapel.
END_OF_DOCUMENT_TOKEN_TO_BE_REPLACED

Saturday morning found the vigilers driving the 40 miles to Lumpkin, GA, for the rally and 1.7 mile march to 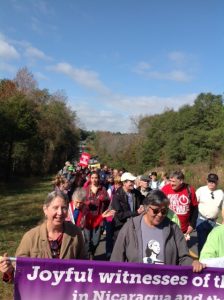 the Stewart Detention Center, one of the largest for-profit immigrant prisons in the country (1,752 beds). There are more people inside the prison than in the small, remote rural town. The march was led by those whose lives are
directly impacted by our country’s unjust, inhumane and racist 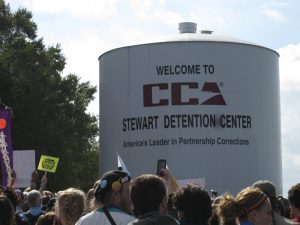 immigration policies. More than 1,000 marchers joined in to raise their voices. They couldn’t see what the site looked like as large buses were parked to block any view of the building. 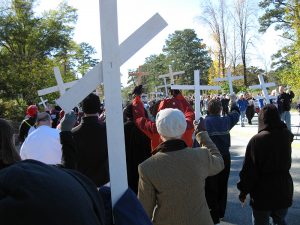 uneral procession continues to be a powerful remembrance of those who have died at the hands of military violence. Crosses with the
names of those who have been killed or disappeared due to state violence are raised as the crowd responds with Presente.

After the procession, SOAWatch leaders announced that SOAW is planning to change its focus from Ft. Benning to the U.S.-Mexican border to address the plight of Latin Americans refugees who are fleeing increasingly dangerous conditions, especially those escaping violence in the “northern triangle” of El Salvador, Honduras and Guatemala.

One of the workshops on Saturday afternoon was about the Las 17 (the 17). In El Salvador, abortion is illegal even in cases of rape, incest, and maternal danger. Because of the strictness of the law, women who miscarry are arrested and tried for aggravated homicide, receiving up to a 30-or-40-year prison sentence. Activist groups have identified at least 17 women who have been jailed after losing their babies to medical emergencies. As one would expect, these are poor, rural women.

We carried you with us in prayer and spirit throughout the weekend.

December 11, 2015 – Elise García, O.P. (Adrian) reports on the final day of the Paris Climate Summit. She points out the focus of community-based and community-led solutions to global climate change. Read article in Global Sisters Report

December 7, 2015 – Elise García, O.P. (Adrian) reports on the second day of the “International Tribunal on the Rights of Nature.” She points out that the climate agreement must be aware of the harm done to indigenous people, “‘the integrity of ecosystems and Mother Earth.’” Read article in Global Sisters Report

On Wednesday, December 2, 2015, a special vespers service was held in the main chapel at the Maryknoll Sisters Center to commemorate four churchwomen, including Maryknoll Sisters Ita Ford and Maura Clarke, who were killed in El Salvador 35 years ago. Read more