Quilts on display at Sinsinawa Mound

Sinsinawa Art Gallery presents “From Our Hands, to Your Hearts,” the 25th annual quilt exhibit on display now through Nov. 29. The show features quilts having a connection to either a Sinsinawa Dominican Sister or a Mound staff person. Each year’s exhibit features quilts not previously displayed.

Betsy Maloney of Burr Ridge, Ill., entered her quilt, “Tillie in the Secret Garden,” in the show. She took a class on machine quilting, fancy stitching and embellishing and had “tremendous fun” making her quilt, trying lots of new techniques. The quilt features the family dog, Tillie. Maloney said, “This quilt is a great way to honor Tillie. Quilting is a part of my essence. I get to use my hands and create meaningful pictures of meaningful things in our family’s life.”

The art gallery is open 10 a.m.–5 p.m. daily. For more information, contact Michelle Till at (608) 748-4411 or visit www.sinsinawa.org. Sinsinawa Mound, the motherhouse for the Sinsinawa Dominican Sisters, is located in southwest Wisconsin on County Road Z, off Highway 11, about five miles northeast of Dubuque, Iowa.

Sister Patricia Siemen, OP, founder of the Center for Earth Jurisprudence, recently gave a live television interview on Pope Francis’ encyclical Laudato Sí. In the interview, Sister Pat speaks of the Pope’s concern about global warming and his special emphasis on developing a relationship with all of Earth’s community – human and non-human – as well as concern for the poor, who are most affected by global climate change. Read more

Four Adrian Dominican Sisters were among a number of women religious who were honored for their support and service of the people of New Orleans in the wake of Hurricane Katrina. A special celebration, hosted by the Marianites of the Holy Cross in New Orleans, included Adrian Dominican Sisters Judy Zynda, OP; Patricia Harvat, OP; Kitty Bethea, OP; and Sister Mary Keefe, OP. Read more

CRS: 7 things you can do to help refugees 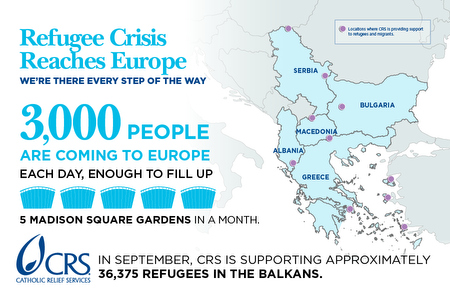 Read the full article from Catholic Relief Services: “European Refugee Crisis: 7 things you can do to help”

Out of the Shadows – Human Trafficking in Our Midst

Marking their 165th congregational anniversary and the Year of Consecrated Life, the Dominican Sisters of San Rafael initiated a regular speaker series that began last January. Once or twice a month, all are invited to a Gather@Grand event. There has been a wide range of speakers and topics of interest to religious, Catholics, and the general public.

This month a distinguished panel spoke to a group of about 100 people on the issue of human trafficking, underlining the facts that trafficking is a multi-billion dollar business with millions of victims around the world—and that it is going on in the very same county where the event was held. Many in the audience said they had had no idea that the problem was so close to home.

The panel was facilitated by long-time social justice activist, Sister Marion Irvine, OP and was joined by Sister Judy Lu McDonnell, OP and Lyn Kirkconnell, current Co-promoters of Justice, Peace and Care of Creation for the Dominican Sisters; Emily Sims, the founder and director of West Marin Advocacy, a nonprofit organization providing services to survivors of family and community violence throughout Marin County, herself a victim of trafficking; and Ron Brown, a member of a local temple, Congregation Kol Shofar, and a member of the Marin Organizing Committee’s Human Trafficking Research Team.

In addition hearing basic information about the issue of trafficking, those who attended were presented with many sources of further information and ways they can get involved to address the issue. As Superbowl 50 is being hosted in the San Francisco Bay area in February 2016, already justice activists are communicating with local hotels to gain their cooperation in identifying and potentially rescuing trafficking victims.